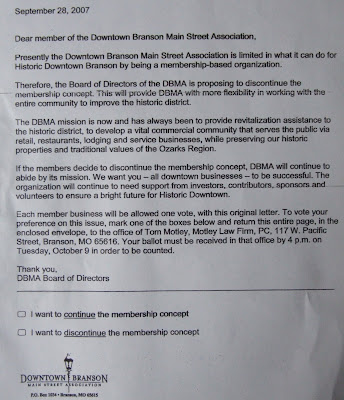 The document above (click to enlarge) was distributed by the Downtown Branson Main Street Association before a vote to elect new board members ensued.
Members will be able to vote yes or no on whether to continue a membership model.
The Historic Downtown Branson Buisness Owners Association (HDBBA), a group of merchants who formed a competing organization to meet the needs of business owners in the downtwon district, began implementing their own strategies to promote downtown which included an advertising run on cable television. The HDBBA extended their contract with OnMedia this week.
A segment of the group promised to re-join the DBMA before members of the board were re-elected. The HDBBA was founded to take matters into their own hands believing the current management wasn't meeting the needs of business owners.
-------------
Representatives from the Downtown Business Owners Association weren't available to speak at press time.
-------------
Prepared by: Unknown