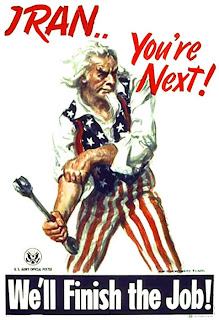 Missouri Treasurer Sarah Steelman issued a bold statement Thursday regarding the Bush administration's Iranian ecnonomic policy. While lauding the president's action on reducing funds to Iranian interests Steelman said much more needs to be done.
Following money into terrorists hands is a topic Stellman has addressed through press releases and interviews throughout the year. Of particular concern is the Iranian Revolutionary Guard and corporate investments that put millions of dollars into the hands of our enemies. See Sarah Steelman's full statement.
Hardliner Missouri Dems gave a thumbs down to Senator Claire McCaskill last month on her FISA stand and many are up in arms for McCaskill's statements backing the Bush administration's stance on Iran.
McCaskill published the following statement on her website concerning Iran in a statement on nuclear proliferation:

The greatest threats to our safety are weapons of mass destruction. The spread of chemical, biological, and nuclear weapons must be stopped. Claire says there must be no uncertainty about that goal.

North Korea, has been stockpiling nuclear weapons without so much as a glance from the current administration. Iran may now be close to producing a nuclear bomb. We cannot allow them to go any further. We must talk to the North Koreans if we are ever to get them to renounce their weapons and allow a verification system to assure their compliance.

Iran's nuclear capability, however, can still be prevented. Unchecked, it will create a domino effect that will be felt throughout the Middle East. An immediate and complete moratorium on their enrichment processes is needed. And it must be non-negotiable. Together with our world allies, we can convince Iran of their own best interest, using the threat of economic sanctions and the promise of world trade and investment. Claire believes they need to know our talks, if unsuccessful, will be followed not by rhetoric and reprisal, but by the full strength and force of the American military.