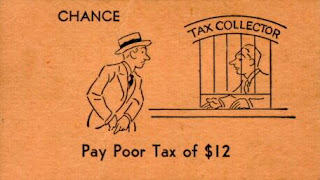 Dead ducks - what many area poor will be without help this winter. The state predicts heating bills could triple this winter. The burden of taxation is taking a toll on Branson businesses as well (see Branson Edge for 12 Month Rolling Fund Totals. Taney County Assessor James Strahan predicts Taney County businesses and residents will face a massive increase when they get their property tax bills this year.

On November 5, 2007, six days from now, Taney County residents will have to ask themselves just how much more they're willing to take.

Hollister has a proposed 5% tourism tax on the ballot. Documentations on ballot language and distribution of funds has been requested. We have received a fax from the Hollister Chamber of Commerce in support of the tax. As one of five individual members on the Hollister Chamber roster, I'd hoped to hear different news other than....raise taxes please.
Hollister Alderman David Willard figures Hollister can't lose and voted to give voters the oppourtunity to decide if they want it or not. Ozark Mountain Newspaper correspndent Gary Groman reports %75 of the tax generated will help build infrastructure and %25 will be used for marketing Hollister as a tourism destination. Willard figures if residents vote against it, low taxation could generate tourism allowing Hollister to execute a higher value proposition. If the tax fails Hollister will be the only tourism area in the region without a surplus tourist tax.

The Taney County Times took a break from the award winning "snake oil reporting" last week (we bought five copies to encourage ethics). Documents regarding funding and the lobbying effort to pass the tax seem to have eluded the public. No filings with the Missouri Ethics Commission have been sent to the best of our knowledge and their high-tech money tracking tools.
Proposition A - the so called economic development tax would create a 90 million dollar bag of money for fun and games - fueling the personal pockets of a handful of Taney County residents.
-----------
Groman had the audacity to ask me if I thought corruption was involved with the creation of the tax - to which I answer patently, thoroughly, by definition.

1. lack of integrity or honesty (especially susceptibility to bribery); use of a position of trust for dishonest gain

We caught them because they weren't very good at it. A series of reports from the Taney County Times and Branson Daily News gave a black eye to the Branson media visible to anyone paying attention. This isn't the media of Linda Morgan's day.
Reading the "a tax almost as good as chocolate" tipped us off something was very wrong. No one loves taxes that much, unless they're receiving gains on the backs of citizens - which was exactly what Vonda Sheets and Donna Clevenger did when they pretended to be reporters while representing a multi-million dollar power grab as Board Members of the White River Valley Historical Society. Though we can't seem to find the individuals funding the campaign to talk citizens out of their hard earned cash we did find both reporters on the White River Valley Historical Society's list of officers. They actually fought behind closed doors to raise taxes for themselves. Like we said, patently currupt - even worse - straight wicked.
Groman wants us to ignore the corrupt and underhanded methods used to illicit public support for a tax levy created by and for special interests and ignoring Taney Counties most needy. He's sat on the fence while those creating the tax made him look foolish on the front page of the paper. Then again, the Ole Seagull hasn't found a tax lately he didn't like.
The one time staunch conservative who hired Attorney Eric Farris to sue President Bill Clinton for sending troops to Bosnia hasn't found a tax he doesn't like lately. Yesterday we asked Seagull, "Have you broken your right wing?" Seems like lately he's been flying in circles tilted to the left ....
Proposition A encourages irresponsibility. It says, "don't show us what you did with that extra two million dollars we gave you this year have another 90 million."
And to the reporters who failed to disclose their masters.
To the community I'd like to apologize for the actions of our local press; we're trying hard to fix corruption within and return to a culture of integrity to regain public trust.
Prepared by: Unknown