Submitted by Kathee Baird
Police in Stone County are looking for a man who has been charged with possession of meth, and has other charges pending.

In late September, Stone County Deputies, served a search warrant on Robert Delong' residence. The man wasn't home at the time, but a drug sniffing dog from the Missouri State Water Patrol alerted authorities to an unopened safe in Delong's home.

Deputies seized the safe and opened it this week. Inside the safe, cops found three pounds of pot, about 150 grams of suspected meth, and four thousand seven hundred dollars in cash.

If you have any information on Delong's whereabouts, you're asked to call the Stone County Sheriff's Department at 417-353-6950. 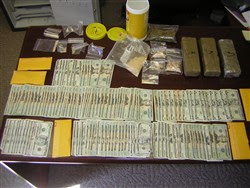