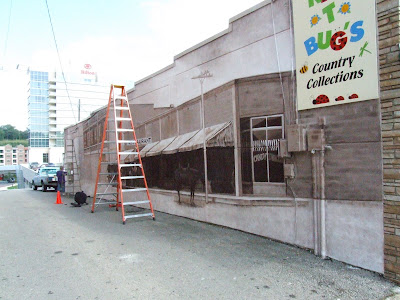 Historic Downtown Branson is much like many downtown districts in Missouri and throughout the United States. However, unlike many downtown districts, Downtown Branson has a heart that still beats. Though numbers overall are down...today is different - downtown is alive with seniors with little to no appetite for the latest brassiere innovations peddled down the street at Victoria Secret.

New TIF funded developments have taken a piece of the tourist pie, yet if you walked outside today you wouldn't know the depth of suffering the merchants have endured. It's bustling today.

The Downtown Branson Main Street Association met in a small room near Business 65. The board of directors has been whittled down from seven to three members. The two full time employees are leaving for jobs with the state and the membership model that exists today looks like it's on the way out.

The tally wasn't read but a representative of the board said votes were in favor of the organization moving away from a membership model.

Though I'm not sure what exactly the remaining members of the board are hoping to evolve too - one thing is for certain - a planned coup by some of the downtown merchants seems to be impossible.

AS I walk into the small room I'm met with something foreign to me as I show interest in the organization - kindness. It's refreshing because the intensity of interactions with the "keepers of the record" hasn't been pleasant lately. It's a welcomed change.

The board goes into closed session - since I'm the only one present that isn't on the board - I'm the only one that leaves. Before I go, I remind the board of the merchants - they've been innovating - they are the largest stakeholders - they care about the fate of our historic downtown as the fate of the district determines what bread they'll have on their table.

I run into Jeff Justus on the street after the closed session is over. Justus, uncle of Missouri Senator Jolie Justus, tells me of his connection with the land we stand on. He recalls his great grandfather who spent his life working just two blocks from our sidewalk debate. Sidenote - he worked two years short of a pension.

His name means something, one of the few families whose name is inscribed on the original documents that changed Lucia to Branson.

Four new members of the board must be chosen and if wisely selected an opportunity exists to mend a divided sub-culture in Branson.
Prepared by: Unknown