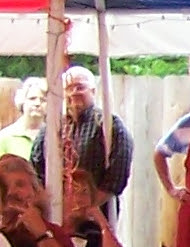 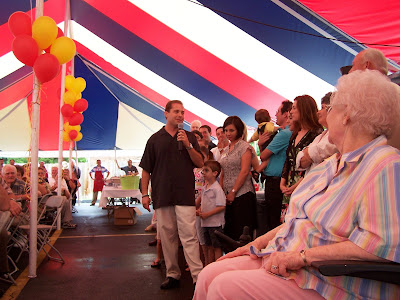 Missouri District 62 House of Representative Dennis Wood has taught me a thing or two in my day. Wood promptly and purposely attends every community engagement possible. Though he's currently on sabbatical from correspondence with the Springfield News-Leader, his presence is certain at major public events.

From Wood I get tidbits and see him enough enough for these to translate to novels about Missouri's second most important legislative body. Wood shows up to everything and the largest complain I've heard about the man is that he'll tell you about "how he shows up for everything" - which he does.

The 14 day stretch where woods corresponded with the Gannet's Springfield News-Leader was taxing in most every way imaginable. Eventually, about the time Wood quit talking to the press, Governor Matt Blunt said he'd have to wait for the legislative session to fix it. Wood and Blunt have been in contact everyday since Lebanon resident Robert Plaster declared himself king of his village declaring independence from Stone County Commissioner's rule.

The company decided to override Stone County Commissioners objections to Plaster's development ideas on the Stone County shores of Table Rock Lake. Plaster did it through legislation and apparently Rod Jetton was the man who helped him do it.

Governor Matt Blunt made a statement which hit national newspapers via Gannet which was "It wasn't that important, I'll fix it."

Good enough for me. I'm not giving free political advice here, but if I was Wood, I'd keep saying that over and over- "Matt Blunt said he would fix it". If I was Wood I'd carry around photocopies of an apology letter from Matt Blunt and hand it out in case someone asked.

Any political error is correctable if handled with integrity.

Wood has been good to Blunt. Still, he fears what the backlash will be next session in Jefferson City.

On Taney County's proposed 90 million dollar sales tax - Proposition A - Wood says "it all comes down to how Eastern Taney County votes.

A lobbying organization has been selling the tax to Eastern Taney County residents saying the majority of a 72 million dollar cash cow will come from Branson.

If Proposition A passes it will some Branson area sales taxes will be above 11%.

The picture above is from the Presley's 40th Anniversary Celebration. I didn't think Wood attended until I looked at the photo of the Presley family and zoomed into the photo.
Prepared by: Unknown