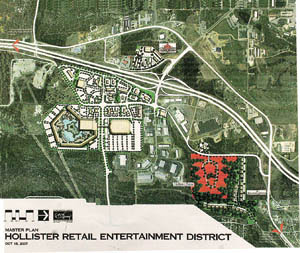 Hollister City Administrator Rick Ziggnefuss said details on a $26 million TIF funded arena scheduled slated to open in 2009 was to be designed with the Hollister School District in mind.

According to Ziggenfuss the current plan to build an arena is being financed through the maximum allowed by law - 100% of property tax and 50% of sales tax. A component to the development announced by developer Justin Gage is the creation of one of the world's largest waterparks which will be built across from the publicly funded Arena.

The Waterpark on the 112 acres of land east of hwy 65 will not be part of the TIF district.

More to come....
Prepared by: Unknown