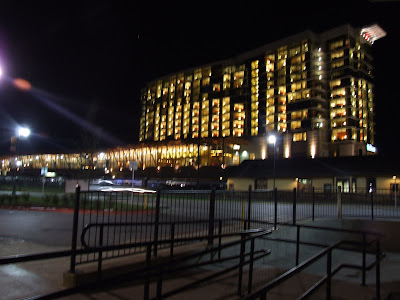 Ben Jones, one of Missouri Lt. Governor Peter Kinder's staffers should be getting an e-mail notification here in a while. While hacking Internet access at the Hilton Peter Kinder walked into the lobby.

Nice guy, I feel bad the funk of my three mile hike this morning had to stand in the way of our exchange of pleasantries.

I always carry two cameras with me - except for this morning. I have only one camera and no data chip.

We talked about the Tour of Missouri (photos below) and I took the opportunity to lobby for a return to Branson. I even promised to deliver on Dick Gass's suggestion that we let the schools out if the Tour of Missouri comes back. Though I have no authority to command such things from the Branson School District I'm certain if it was a make-or-breaker - I could deliver.

When asked if the Tour of Missouri would return to Branson Kinder expressed other cities were pressuring his office for a taste of the tour - Hannibal was one city he mentioned.

When asked about extending the number of touring days Kinder said with a nod, "we're working with that idea."

Kinder said Request for Quotes (RFQs) would be issued to city's interested in hosting the next Tour of Missouri.

The bottom line is the same as always, it's about money and what cities are willing to pay it.

Kinder said Susan Montee's office conducted an audit of his office that will be coming out next week. Montee's staff went through two years of receipts.

Kinder said TeamKinder Blogging was slowed due to an overload of responsibility from the Tour of Missouri and that posts will continue soon.

The picture posted above is a rare sight. Before Kinder stayed at the Branson Hilton a full security check was conducted. Since the building was constructed it's the only time I've seen all lights on at one time.

Kinder booked a simple room, in fact, of all the rooms booked by representatives of the state, Kinder's lodging requests were the most humble - no special arrangements. I love it when politicians fly coach. It sends a good message - and you never no when someone might be paying attention.

***Update
Peter Kinder walked through and made a point to stop and say hi. He remembered my name which was impressive.
In his hand was the autobiography of Supreme Court Justice Clarence Thomas. Kinder was excited about the book and the history of Thomas's days in Missouri. He recommended it. He'll be coming back soon and though he's only read 80 pages, I'm certain he's a fast reader and hope he'll be so kind as to loan the book to me when he comes back.
I got a photo this time. No cord - will post later
Prepared by: Unknown