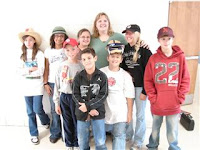 Space exploration is a hot topic in one Ozarks classroom this week. More than 600 sixth and seventh graders, along with faculty and administrators of Branson Intermediate School, watched as their signatures were launched into space aboard the Space Shuttle discovery shortly before noon today.

The first Friday of every May, NASA and Lockheed Martin sponsor the Student Signatures in Space® program. Sixth grade teacher, Kelly Neal, was looking for a way to get her students excited about space exploration while visiting the NASA website. When she found out about the program, she knew this would be a way to do it. Neal said, “ the kids were excited when they signed the poster last May, but, watching the shuttle lift off today made it very real for them.” Another claim the students can make is that their signatures flew with Luke Skywalker’s light saber. In honor of the 30th anniversary of the movie, Star Wars, shuttle crew members took that as well.

Branson Intermediate Elementary was chosen as one of about 500 who received the honor this year. Since the program began in 1997, more than 4 million students have participated in the Student Signatures in Space ® program.