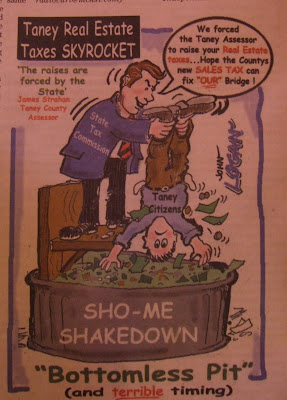 James Strahan is placing an ad in a Branson area newspaper this week and as Strahan said, "I'm not paying 750 dollars to send a greeting card."

Strahan said the State is increasing assessments 12% which represents a substantial tax increase for certain districts.

The cartoon above was created by John Logan. It would appear John Logan is standing in opposition to increased taxation including Proposition A.

----------
Proposition A is a tax increase two corrupt reporters worked behind the scenes to put on the November ballot.
The money lines the reporters pockets through a Historical Organization the two "supposedly competing news organizations" control through seats on the board.
Prepared by: Unknown