Missouri's Integration of Church and State - Meet the team 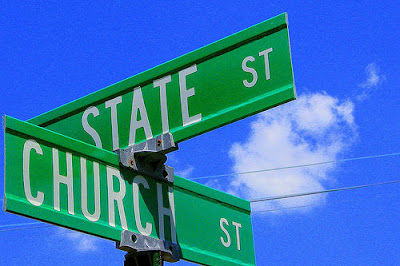 
"The most powerful sources of charity, virtue, and shared prosperity in our society are not found in government, but in families, churches, charities, and free markets," Blunt said at a Faith-Based Conference held today in Jefferson City. "If we really desire effective government, we must engage these well-springs of charity, virtue, and shared prosperity. If we really want services that do more than feed a man for a day, or provide temporary shelter, we must cooperate more often with faith and community-based organizations. If we really wish to transform lives and empower Missourians to make lasting positive change for the future, we must find a way to help get more people of faith involved in our state-administered social programs."
Blunt announced the first step of Faith-Based Missouri, a five person team he charged with studying how we can improve relations between state government and religious and secular charities.

The team will include three Missourians with life-long ties to faith-based communities and state employees who share the governor's commitment to building Faith-Based Missouri. The community team members will travel the state to meet with leaders in Missouri churches and charities to learn:

1) what we are doing right

2) what we are doing wrong

3) what we can do to encourage greater cooperation

Liason's were announced from the state:
"Our partners in the faith community are an invaluable resource and help us in our mission to serve Missouri citizens," Director Scott said. "I want to thank the legislature, especially the hard work of Senator Mayer and Representative Grisamore, for passing Senate Bill 46 that will allow us to continue to strengthen our relationship with the faith-based community and continue the good work that's being done."

Those appointed to serve on the Advisory Committee are:

From the Church:
* Dr. Reynaldo Anderson, of St. Louis, is an assistant professor of education at Harris-Stowe University. Dr. Anderson has published numerous articles regarding the African American experience. His life has been varied with involvement in the United States military, grassroots political activity, church and academic research and study. He is a dedicated member of Saint Peter AME Church in St. Louis.
* Rev. Andrew Rollins III , of Kansas City is an ordained Itinerant Elder in the AME Church whose family has a long history of ministry and community service. As a youth he was nurtured on the civil rights movement and at an early age he became concerned about the state, future and destiny of his community. He believes the mission of the church should be holistic ministering to the spirit, and soul and body.
* Sheriff Greg White, of Cole County, is an ordained Baptist minister with a lifetime of experience in serving his fellow Americans. He understands how to bridge religious and cultural divides, and has some innovative ideas on how faith-based organizations can serve Missourians through disaster response coordination.
* Ed Martin, of Jefferson City, serves as Gov. Matt Blunt's Chief of Staff. Martin was the Father McGivney Fellow for Rights of Conscience with Americans United for Life and is an active member in the Catholic Church. He previously served as director of the Human Rights Office for the Archdiocese of St. Louis and as chairman of the Papal Visit Committee for Social Concerns for Pope John Paul II's visit to St. Louis.
* Angel McCormick Franks , of St. Louis, is the Director of the Office of Supplier and Workforce Diversity and has traveled the state working to promote diversity within the state government and improve the opportunities for women and minorities to access state employment opportunities and state contracts.
Prepared by: Unknown