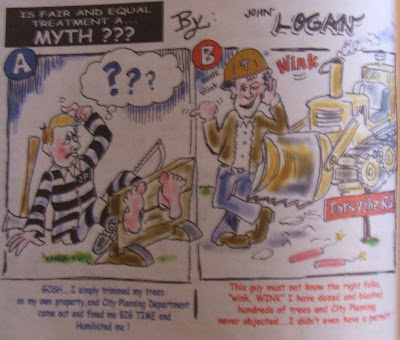 I wrote about an incident involvinig three sisters who had a three year stint with the city becuase they cut down trees without authorization. The fuzzy cartoon above was printed in the Branson Daily Independent and created by artist John Logan.
The developer depicted to the left is building the Tanstone development which brought several angry citizens to the Branson city council meeting last week.
Regarding Tanstone, Branson Alderman Bob McDowell asked during preparation for a planning and zoning meeting, "What's the problem, are the fines too low?" stating the development has generated more complaints than any other issue he's had to deal with.
The term "Treegate" was dubbed by Gary Groman who was kicked out of the court during court proceedings. As a result, I was the only journalist with the story.
Prepared by: Unknown