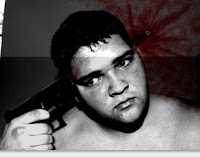 Most Cops are good but some are bad. Unfortunately, one bad apple can ruin the whole bunch. As a result, the head of police organizations try to find bad cops and get them off the force as quickly as possible.
The photo above is of Clint Loveland an ex-police officer for the Hollister Police Force. The photo was acquired while I was doing investigative research on three police officers fired from the force. The premature story was posted on this website called Cops Gone Wild.
The real story of Clint Loveland is less sexy than people who hate cops want to believe. Loveland, as I understand it, loved his father and wanted to follow in his footsteps. His father was a police officer and Loveland joined to the force to make his father proud. Loveland has a special gift, he's one of the finest photographers in Taney County and his artistic skills are matched by no one. Like many of us, he digs hot chicks. The photo posted above was a self portrait created by Loveland himself. A photo of Loveland was deemed inappropriate and presented to Loveland by city leaders. As an employee of the city he was asked if anymore pictures were to be found. Loveland said no. Rick Ziggenfuss, Hollister's city administrator, hates being lied to - it's a sure way to get fired. Because another photo appeared, Loveland was released from the force.
Because Loveland was a city employee the true story is protected by a loophole in the Sunshine Law.
Sheriffs and police chiefs hate the Sunshine Law. As Branson Police Chief Carrol McCullough once told me, "I don't trust the press." I responded, "Me neither." Cops have guns and tazers which can be used to intimidate people.
Fortunately, good cops don't use them to harm but rather protect people. On the street, cops love me. The love me because I believe their wages should be doubled and their training should increase so they can better protect the people. I put my life in their hands everyday as I study the community in which I live.
Still, it's not my job to do their job. I'm not paid to be an arm of the police force, but I'll put my investigative reporting up to their finest detectives. Compare my coverage of a crime resulting in an arrest in Downtown Branson. Compare the coverage by the Branson Edge by clicking on the link to the official report submitted to the press by the Branson Police Department posted below:
Branson Edge Crime Coverage: Pirate Fires Shotgun after Greco Roman Wrestling Match

Shortly after 5 a.m. this morning, officers were called to the Artistic Armour tattoo shop located at 718 South Commercial reference a firearm being discharged during an argument at this location. Responding officers ascertained that an altercation had occurred between a 32-year old male and a 26-year old female who were living together in an apartment adjacent to the tattoo shop, during which a shotgun had been discharged one time. The weapon was found in the building by officers. There were no injuries during the incident.

The male, Leonard A. Midgett, was arrested for domestic assault and unlawful use of a weapon. Midgett remains in the Branson City Jail with no bond set at this time. Paperwork concerning this incident will be forward to the Taney County Prosecuting Attorney for the determination of charges.

09/14/07
Undercover cops are given special privileges, including the right to do drugs. They are the only people - except for doctors - that can legally allow drug and participate in the ingestion of narcotics.
Criminals don't understand this and there is good reason to believe the misunderstanding resulted in a homicide in Hollister, Missouri. It has been assumed that a man was beat to death after refusing to smoke marijuana while awaiting a shipment of Meth.
What if a police chief is corrupt?
The answer to this question makes patriots shiver in their boots. Nothing can be more dangerous. Let me draw a metaphor. If man is born free than police organizations are small armies. The head of an army is the king. The king directs the army by instructing the general. In the city-state model the police chief is the general. If, for example, the Mayor has participated in corrupt activity - such as violating the Missouri Ethics Commission guidelines for campaigning, she might tell the police chief to harm an innocent man to avoid the pain she'll have to endure through the press. A wicked and corrupt chief could deal with this scenario by discrediting the reporter.
The best way to discredit the reporter would be to a. set the honest reporter up by framing him with a crime or b. creating a fake police report and demanding he be evaluated by a medical doctor. The medical doctor would be the judge in an alternative legal system. Civil rights would not apply. In the parallel system, because only an accusation is made, the doctor has 72 hours to determine one of three things:

1. Violent and a danger to society
2. Suicidal - a danger to himself
3. Homeless - unable to take care of food, clothing and shelter

Few people truly believe in God and society by default is Agnostic which means "you cannot know whether or the existence of God is provable. As a writer, by default, I have to pretend their is no god to be an unbiased custodian of fact. If I say there is a God, the Doctor can certify me, the patient, crazy and take away my civil rights. The patient could be anyone who challenges the government.
Proving he's able to take care of food, clothing and shelter is near impossible. Most citizens believe in Doctor's more than God therefore if the patient says, "Call my friend Joe - he will feed and clothe me", the Doctor can call Joe and tell him that the patient, Joe's friend, will be harmed if he doesn't take a heavy narcotic. The doctor believes, through faith, that the narcotic will cure the patient - or at least he has plausible deniability as a "priest of the religion of science". Joe can then be convinced by the doctor that he's "acting in his friends best interest by not providing food clothing and shelter to his friend." The patient's reputation will be marked and the corrupt police chief can have the patient arrested at will when the doctor releases him to the public." Sanity is hard to prove. Thank God we have good cops who hate corruption.

**********Commentary*************8
Once, many years ago, I watched a dirty cop beat an innocent man. When I approached the cop he had me placed on a 72 hour hold. He had to discredit me before a higher authority of law got a hold of my video tape.
As a student of government, who believes my relatives died for a good cause - the cause of freedom and the enduring natural rights to live free as stated in the Constitution of the United States of America - I was appalled. I had always believed I had unalienable rights.
Becuase of my "mad skillz" in business, I'm able to make good money. If I choose a different path it's for a good reason. I'm not a drug addict so I refused the narcotics (drug addicts make fake prescriptions for these types of pills.) Because I've never struck an innocent nor do I wish for my own life to end the doctors tried me in an alternative court under the premise I was unable to feed myself. In the Christian tradition, it is believed that God feeds the birds (even the vultures) and creatures of the earth. Furthermore it is believed that God loves humans even more than animals. Telling the doctor, God will feed you, is a bad idea and a good way to be certified crazy.
In my case, I proved through an alternative legal system that I was in fact sane. In fact, the doctor issued a certificate of sanity - a rare and unusual gift. The doctor's were required to release me immediately and I was given enduring protection from bad cops.
If a dirty cop tried this trick he would probably assault me first and try to get me to hit back. Next, he's spread nasty rumors with the help of a dirty politician. If I were smart, I'd hire an attorney, share audio and video evidence with the lawyer and sue the panties off the king for defamation unless she corrected the record and restored by reputation.
It's a good thing we live in a good city and that I don't have to worry about such things.
As a reporter I'm an internal affairs unit that the police can't control. As a result the police feed me information and give me information they ask me to keep off the record. I've never breached an officer or police chiefs confidence - I talk to many in my line of work. They play cops and robbers, I'm not in the law enforcement business; I'm in the integrity business. Sometimes, they hate me cause I'm like MC Hammer - "Can't Touch This."
While Rodney Daniels was prosecuting attorney he battled with the Branson Police Department over a report Daniels issued. In the report, Daniels identified the location of a drug crime that was submitted into evidence. According to McCullough, the release of information to the public would have compromised the safety of an undercover cop. MCullough did damage control and stopped the press from releasing the information that could have harmed one of his street soldiers.
I thank God I live in America where freedom of the press is celebrated and thank my relatives who laid their lives down so I can do my job and remain protected.
Prepared by: Unknown