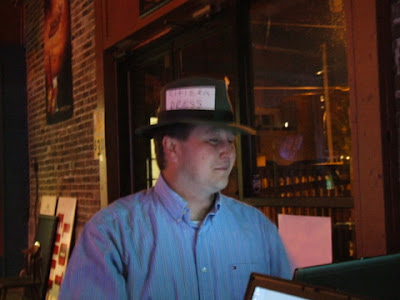 A press pass is a powerful tool for the unknown, unrecognized and novice journalist. Personally, I've found greater access as a constituent than a member of the press. In fact, being recognized as a pro works against me as politicians love stealing my photography for their personal collections and campaign use. I write for the people not politicians. As a government watchdog, it's my responsibility to close the gap. If I were king, I'd make politicians where "taco bell" style t-shirts with a nametag that reads, "Can I take your order". Never forget, as an American your representatives work for you not the other way around. If they step out of line, fire them with your vote.
Larry Litle is a friend who joined professional ranks after helping me with a story for published in the Taney County Times. We have a "blogging journalists posse" where we meet and discuss politics at the pub. Litle, pronounced "Light ole", wanted to meet Guiliani while he was in Southwest Missouri. As a correspondent for the Taney County Times I sent Litle to cover the story. Litle took photos, grabbed a few quotes and I wrote the story for the newspaper with his help. Litle has a co-credit on the story and can now be counted as a professional journalist.
The photo above was from an election night blogging session. Springfield Citizen journalists blogged with Missouri State University Journalism Professor Andy Cline and Gannett's Springfield News-Leader Opinion Editor Tony Messenger. I was mobile grabbing interview footage and photography from Republican Headquarters.
Prepared by: Unknown