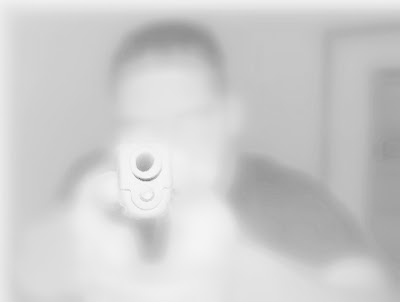 Graphic modified from dismissed officer's photoset.
I'm sufficiently horrified. I suppose it's a skill learned over time - how not to feel what you're seeing and studying.
4 Hollister Police Officers leave the police department.Three are reported to have been dismissed.
I've been on the story full-time for a couple weeks. Hollister city administrator Rick Ziegenfuss tells me last tuesday I'm the only reporter that's made any inquiries about the topic.
Rumor on the street: Cops gone wild - compromising photos, porn, drugs, underage...
Inquiries suggest the story goes deeper than Hollister...likely ->Christian County + Springfield.
Dispatch at the Hollister Police Department denies any officers have left the force.
Unofficial sources are compelling. It comes to a point that an official source isn't needed. But...why aren't they talking? Why does the Branson Daily News (three blocks from the police station) have nothing? Still, I'm kinda disappointed when I don't hear from Hollister Police Chief Darren Parker....days pass. Sitting on the story is making me physically sick. My gut is wrenching... To date, I've never called an official source to make up a story for me. I'm alone on this one. Most city public relation specialists know they can put whatever they want in the newspaper (Thomas Paine is probably doing back flips in his grave).
A few pictures float my way and over time a body of evidence is being altered. Wait...Are the police on top of this? You hear stories of bad apples, but this is the exception...right? One thing scares me even more..."Why am I the only reporter that knows about this?"
The inside game goes a little like this - everybody keep quiet and this will all go away. They're right. News is a perishable good. After a period of time goes by, it doesn't mean anything anymore.
Wed - > I meet up with Sam Clanton and over a beer and blues-till-the-morning-sun-rises I let him know I have a story...
Enter KY3 David Catanese. Catanese heads over to Hollister City Hall, then marches into the police station with a camera. Chief Darren Parker spills that COMET is doing an investigation.
City officials have a hard time believing it wasn't me that leaked the story. I simply explain that I'm in no position to work 80 hours without pay...which is exactly what happened.
Greg Brock said he's had it for a month. The thing I'm asking is, "Why haven't all the sordid details come out yet?" Why weren't we given the green light when the investigation was over?
I need to learn how not to be affected if I'm going to do this or I can become one of those reporters I hate. Do you know the kind? The kind of journalist that is so busy kissing the backsides of public officials that they forget to give us the information we need to be free and self governed.
But, I understand something now that I didn't understand before. Why carry the burden? At least, I understand why some don't.
Prepared by: Unknown