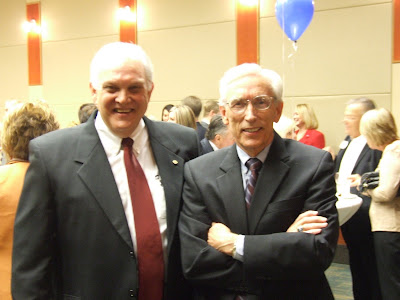 I ran into the Combs Brothers last month at a fundraising party for Governor Matt Blunt.
Leon Combs, left, owns a book publishing company, the largest mansion in Taney County (un-verified) and an elk farm. His brother, right, is the Superintendent of the Bradleyville School District.
Leon's experience with Proposition A, which we opposed was an unpleasant experience for him. During e-mail correspondence while Leon was in Las Vegas we learned Leon became dismayed with politics. He doesn't want to re-enter the arena becuase of it.
The Combs brothers disagree with my assesment of their position on issues I've dicussed. Becuase of the Combs polititcal position and wealth their word carries a lot of weight in Eastern Taney County. By status and position they are inescapably political thus sacrificing rights average citizens are enabled through the standards set forth by the Society of Professional Journalists.
Becuase of their massive political power, they also have the right to be used by the press as a catalyst to deliver their viewpoint.
An interview with the Combs is in the process of being scheduled. Enabling their voice is the only fair way to let them counteract scrunity demanded by reporters as custodians of fact.