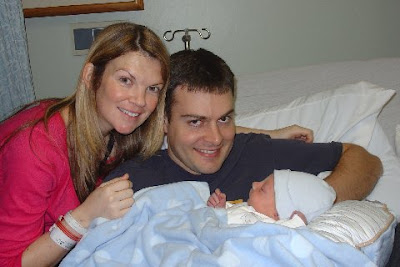 Laura and Joel Merrifield were blessed with a 7 pound 10 ounce 20.5 inch baby boy at 12:54 AM November 28th 2008. Benjamin Matthew Merrifield was born at Skaggs hospital in Branson, Missouri.

*****Commentary*******
Benjamin's father Joel has always been a great friend, savvy businessman and I believe he will be a great father.
Joel practices Judaism and intends to raise his child in the religious tradition. On the eighth day of Benjamin's life he will be ceremoniously circumcised as a reminder of Abraham's covenant with God. In the Judeo-Christian tradition it is written that Abraham circumcised himself (ouch) as an adult and that the family line would endure throughout the history of the world.
In 30 days another ritual will ensue, here are the details:

A pidyon haben, redemption of a son, takes place 30 days after the birth of a first-born baby boy. The tradition is based on the belief that first-born sons were to serve God in the Temple. To redeem them from that obligation, five shekels were given to the Temple priests, who then served in the Temple instead. The ceremony today usually involves a symbolic charitable donation.

As I understand it, the ceremony originates from when Moses brought commandments to his people liberated from Egypt. According to tradition, there were two groups of Levites that split paths when it came to obeying the law. The Levy's listened to Moses and the Cowen's did not and continued to worship idols. Traditionally, a Levy had to be paid five pieces of silver for the firstborn son's life.

The name Cowen means high-priest, is considered the true line of Jews and was the name of my Great Grandmother.

May Benjamin Matthew Merrifield live a blessed life and achieve success and live a happy life. May the Merrifield's fold continue to increase. They're great friends of mine and a blessing to the community.
Prepared by: Unknown