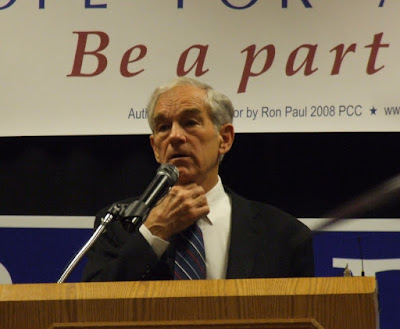 We're blogging live from the second floor of the Marriot Hotel in Des Moines, Iowa.

Paul is in good company tonight as an immigration reform group is sponsoring the attendance of a dozen radio stations downstairs.

With a tip from the Washington Post Online - we're going to try to beat the national press in delivering video from the speech that just concluded.

We'll be posting video and interviews from congressmen and civic leaders chiming in on the immigration issue later tonight.

Ron Paul is taking time to shoot photos with every member in attendance; however, attendees are not allowed to use their own cameras - perhaps, in an attempt to continue to drive traffic to his websites.

An study of presidential candidates performance with Internet social networking sites shows Paul as outranking every other candidate- a sign of the demographic his audience appeals to.

We'll be posting Full Coverage of the Iowa Caucus, including videos, photos and general information on our 2008 Caucus Blog.