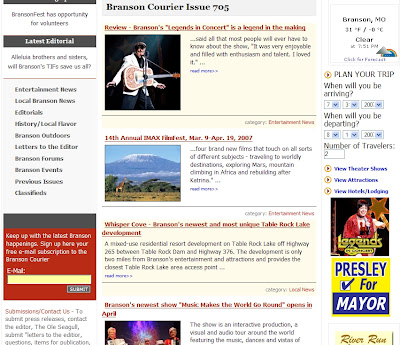 Citizens have a right to know what they're getting when they read the newspaper. Because some of the local Branson reporters refuse to follow ethical guidelines, democracy in Branson is being threatened. This is particularly true when reporters engage in financial transactions with politicians.
Ozark Mountain Newspapers has a policy regarding political analysis during election seasons. In order to increase funds from political advertisers politicians are required to purchase ads and a blackout period prohibits reporters from writing about candidates nearly a month before elections.
The details of Gary Groman's contract with the newspaper are unknown to me; however as an employee I was not permitted to post stories published by the newspaper on-line. As a result I changed format to 1st person and deviated from Associated Press format. According to Missouri State University Journalism Professor Andy Cline, this is a standard most newspapers adhere to. Once you sell a story, it's property of the media company. Unlike any other industry I've worked in, newspapers give credit to the employee who creates the work (most of the time).
Prior to the election, I noticed an advertisement entitled "Presley for Mayor" placed on Gary Groman's website (see the ad in the graphic above) , an online newspaper where digital versions of his newspaper column are placed. To the "ethically aware" journalist this would seem inappropriate. After finding the shocking and blatant disregard of standard ethical practices I called Raeanne Presley and asked her about the placement. She stated that her husband made the ad placements for her campaign and she wasn't aware of how much the placement in Groman's online newspaper was purchased for.
Neither the Taney County Times nor the Branson Daily Independent gave balanced, comprehensive news coverage. Before the election, Groman ran an editorial endorsing the Mayor as well as other candidates. I was unable to find a record of the transaction in the Missouri Ethics Commission Files. Due to the fact the newspaper never covered the candidates thoroughly I felt Groman's endorsements were a deterrent against democracy and a vote of no-confidence on the citizens right to be free and self-governed.
Written endorsements are excluded from campaign finance disclosure requirements set forth by the Missouri Ethics Commission (MEC). Candidates are required to disclose advertising consideration. Candidates are not required to file with the MEC if donations are below a certain amount. Advertisements are not excluded from the special protection given to journalists.
Last week Mayor Raeanne Presley contended Gary Groman neither spoke with her before making the ad nor negotiated a price for the ad.
Campaign finance regulations require donations above a certain amount to be filed under "in-kind" contributions. This keeps transactions on the record that might be sideswiped if the only consideration reported was cash.

*******Commentary*********
By far this was the hardest post I've ever had to put up. I like the Mayor and though I don't agree with all of her plans for Branson felt a moral conviction to educate the public about the transaction.
As for Gary Groman, I think he has a lot of potential but don't believe the public can believe a word he says if he doesn't commit to a standard of ethics.
I don't believe a reporter should take a political position from a politician, contribute to a campaign nor write about ventures he/she benefits from financially. Groman has two websites that it appears politicians may be able to "donate" to. I believe Raeanne Presley was the right choice for Branson and believe that Groman believed she was the right candidate as well. In my opinion, the ad placement was not a contributing factor to her overwhelming victory by vote of the people.
At the same time, I believe disclosure is a minimal standard when even the possibility of wrongdoing comes into question. I have encouraged the media community to adopt ethical guidelines and believe the people deserve to know what they're getting. To date, due to the tremendous personal bias of Groman's reports, I don't think citizens are getting a fair shake. Issues aren't being addressed in a balanced fashion and Groman's personal hatred towards individuals delivered to the citizens of Branson every sabbath far from righteous. The people deserve better and I intend to make sure the next election isn't hijacked by the "Mark of the Bird".
Before this post was made the Publisher of Ozark Mountain Newspapers was contacted, the mayor was contacted, the communications director for the city of Branson was contacted and Gary Groman was contacted directly. I gave ample time for any action that needed to be taken - taken care of. Groman was arrogant in his response, "You don't know the conditions in which the ad was placed!", he screamed. When I asked him to educate me about the circumstances he swarmed out the door.
Earlier today I was a guest of the City of Springfield to speak about blogging as a journalistic method. From my assessment, the Springfield Media Outlets are far more ethical than the saddening actions of our local reporters who unrepentantly disregard standard journalistic practices. On the street, the people think they're a joke. Of course, most local journalists come here to get the real news.
The Internet and campaign financing will continue to be a problem for election officials as the medium becomes a more important component of distributing political information.
Prepared by: Unknown