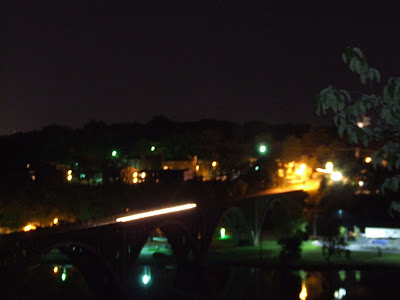 (Photo taken Thurday Sept. 14 Overlooking Taneycomo Bridge) Scandal. Gary Groman separates himself from Branson Mediagate today in an article about the new sales tax the County is proposing.
Meanwhile, the White River Valley Historical Society is in the process of erasing tracks of a plan to create a multi-million dollar facility at tax-payer's expense at a cost to the business entities and tourists that visit Branson. We've elaborated on the topic extensively in several posts including, "The Payoffs, The Ripoffs, The Things Nobody Saw" in which we begin to implicate individuals involved in a blatant betrayal of public trust by civic players.
We hit hardest last week after several warnings, pleadings and sharing direct knowledge that we know exactly what's going on, where and why.

From Groman's article "Are Taney County voters being steered into a tax they don't need?"

"To an Ole Seagull, in terms of how what he calls the “Steering Committee” tax has evolved to its current state, it seems that the bridge is an add-on to improve the chances of getting the tax passed and, what an add on it is! In its earlier stages, it was a one eighth of one percent. Now it has grown to one half of one percent, a 300 percent increase, ostensibly because of the bridge.

Yet, there has not been one public announcement relative to what percentage of the Steering Committee tax is intended to be devoted to that purpose. More importantly, there has been no announcement of what the Taney County Commission that put the tax on the ballot will do to insure that, in fact, that percentage is devoted to solving the issues involved with the bridge.

Perhaps the more burning issue is whether an increase in the retail sales tax is even needed to build a new bridge. As was recently pointed out in connection with the emergency funding of the assessor’s office, Taney County has millions in a contingency fund. If they have that much for emergencies how much more does it have in other reserve funds? If the city of Branson’s sales tax revenues have grown by 15 percent over the record year of 2006, hasn’t the same thing happened at the county level?"

----------
Yes Gary,
The Taney County Commissioners received an extra $2 million. We hope your work continues so we can begin the healing process from betrayal of the press paid lobbyists pushing this through.
Prepared by: Unknown