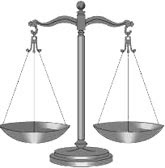 The Columbia Tribune Editor told the public ignorance is bliss playing. "pay no attention to the man behind the curtain." with the statement.

Then encouraging public ignorance and apathy:

"I hope this debate has created more public support for the Missouri Plan. The method of judicial selection is more important to our welfare than one would know from the general lack of interest or awareness it usually enjoys, but such apathy actually is a good thing, reflecting an acceptable status quo in most citizens’ minds."

Hey, you only paid 50 cents. If you forked out an extra 8 bucks you could've purchased last weeks Missouri Lawyer's weekly. The thin broadsheet provides some fascinating reads and is "the source" if you want any figment of truth when it comes to legal analysis.

While the Columbia Tribune promoted ignorance, Missouri Lawyer's Weekly ran, "The Partisan History of the non-partisan plan" in which we learn about Democratic Gangsta'/Politician's such as Thomas Pendergast as the reason the Missouri Plan for selecting Supreme Court Judges was created.
According to Missouri Lawyer's weekly the Missouri Plan has been controversial since its conception favoring Democratic appointments more than Republican. This has everything to do with the historical political climate of Missouri, which leans to the left more than the right. In fact 43 of 67 appointments were Democratic Governor appointed. All had heavy political ties, appointments and labels.

Though the Missouri Plan for selecting Supreme Court judges is supposed to have a political balancing effect (equal number of Democrats and Republicans) it hasn't. Missouri Lawyers Weekly demonstrates only 4 of 33 appointments crossed party lines.

If we're judging the judicial plan based on non-partisanship the plan is a dismal failure whether 33 states have chosen to follow it or not.

Matt Blunt appointed the only Republican of three candidates appointed to him - continuing the partisan tradition of the so called "Non Partisan Missouri Plan."