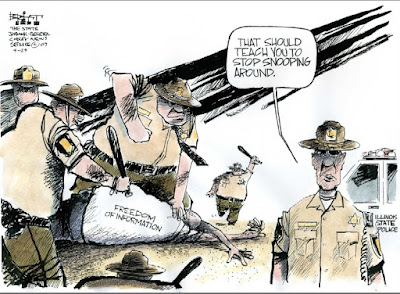 Under the auspices of the Sunshine Law police chiefs and Sheriffs are governmental entities with the same information release responsibilities as any other political body.
Last year, we began requesting digital documents asking police agencies to release digital information. Shortly after the request was made in front of the Board of Alderman another publication (Branson Daily News) began requesting the same information.
The Sunshine Law is designed for citizens not the press. Constitutionally, freedom of the press - means citizens of the United States have the right to press. The corporate press came much later in our history.
Our nations forefathers used print materials to create political dialogue that swayed the people to begin a movement to create a nation independent from the British Empire. These texts pondered freedom, the nature of man - his relationship with the creator and freedom. They were the driving force behind the creation of our nation.
On Branson Agent the Federal Bureau of Investigation delivers weekly stories from the field. It's uncommon for these not to include abuse of power by local police authorities, lobbyists and politicians.
The Newspaper Association states the importance of arrest data is to ensure citizens aren't locked up without notice where family members and friends can't find them. The Sunshine Law also forces police organizations to release video information upon request.