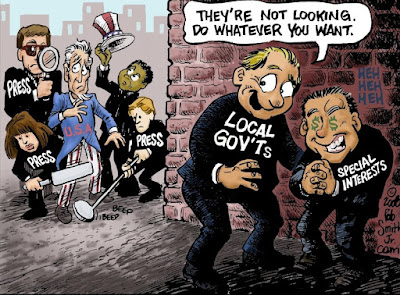 Legislation trickles down. While ample press forces the federal government to endure significant scrutiny local governments and politicos often evade the democratic process.
Changes in the newspaper industry are emphasizing local coverage to differentiate and provide citizens with information that isn't available any other way.
The news cycle is changing. Sheer rapidity of information release requires a high level of expertise. The amount of information coming out of government offices is astounding and dominates the press through self reporting from agencies. Unfortunately, many of these reports are highly charged and politically motivated.
Last year, we setup Branson Agent as a distribution medium for public entities and public relation agencies. The site recieves massive traffic and is easier to maintain than a site where unique content and photos are generated. At peak, the site hosts 50 new pages daily and commonly beats other regional media outlets - the information age is here - we all get the news at the same time.
After some practice of watching the wire, it becomes obvious what the next edition of traditional media will report. Often, no credit is given to the original source or government agency. During times of controversy or election cycles the wires become flooded with partisan press releases. For instance, the Missouri Governor's office had days this year where a dozen press releases hit the wire in a four hour period.
Investigative reporting is expensive and the art is for the most part dead and the traditional media as many of us knew in our youth died with it.
The Federal Government has the most attention and accountability whereas many local government entities aren't covered at all. The expansion of psuedo-government entities makes it difficult for any beat reporter. Several of these meetings attended this month have no members of the press present.
Regional publications are trending towards cutting off national and international reporters and depending on a smaller group of journalists focusing human resources towards places, people and events outside newswire reach.
The latest effort of corporate news organizations is to find new ways to engage local citizens and experts with specific skills. Contrary to popular belief, the newspaper isn't dead - but the demand for national press - when it's so easily accesible has forced the industry to evolve.