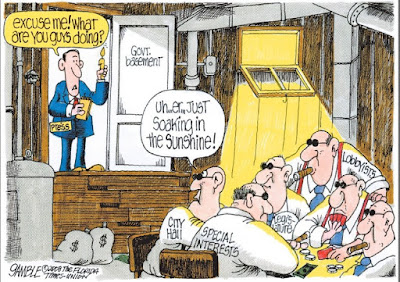 Branson recently hired a lobbyist whose basic data we'll be posting at the end of the week. Some Branson Alderman were against hiring a lobbyist since there aren't any pressing issues on the city's agenda.
The rules regarding legislative lobbyists are strict and published on the states website. The leading advocate opposing the practice is Randy Turner editor of the Turner Report.
Branson Alderman were convinced a lobbyist for the city was important after hearing from Silver Dollar City lobbyist Chip Mason. According to Alderman present, Mason explained the halls were flooded with influence peddlers during a proposed change to the Missouri Constitution to extend gambling in the state two years ago.
Though the reporting standards for lobbying activity are strict, the practice and growth of the lobbying industry has grown substantially.