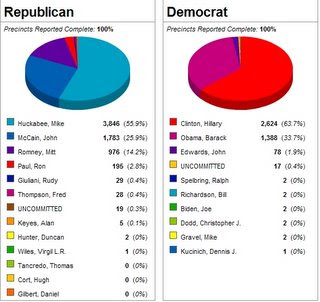 The image above depicts Feb. 5 Democrat and Republican Primary results from Taney County.

Taney County Democrats
Hillary Clinton scored big in Taney County with 63.7% of Democratic support with 2,624% of the vote leading Barack Obama's 1,368 with 33.7%.

Taney County has voted Republican in all but one general election since the state was founded but this primary may indicate change in on the way with an extraordinary turnout of Democrats voting. In fact, Democrat turnout saw a record high and indication a couple of other races we'll be covering later this week will be heavily contested.
Prepared by: Unknown