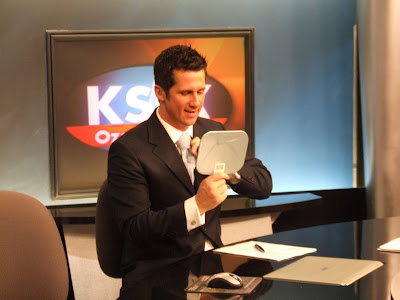 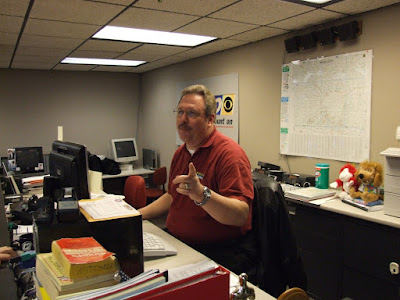 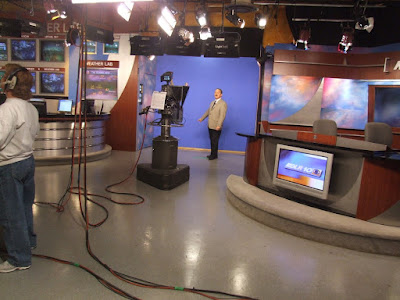 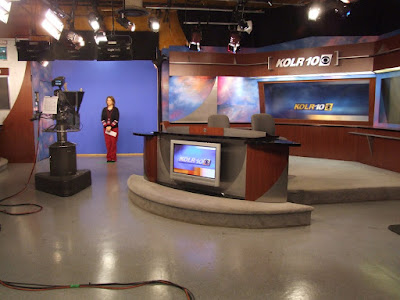 After a cup of coffee I headed into Springfield for a blogging day. Brad Haller invited me to join the 7:00 AM KSFX morning newscast.

For me, it was interesting to see the production elements of the show. The KSFX newsdesk and the KOLR newsdesk sit yards from each other divided by a set of cameras on rollers and swivels allowing the two channels to share resources and reduce production time.

I was interviewed by Rob Evans - nice guy. He seems like a fun guy to have a beer with and a horrible guy to share a bathroom with. The man above holding (as my daughter would call it) his "pretty princess" mirror. In between stories Evans shared his light hearted demeanor in between the loving gazes he reserves for himself. By the way, he has a good sense of humor about it and posed for the picture above.

The news desk is populated by the unnamed gentlemen posted above. The assignment desk is elevated above the reporters, much like a courtroom and serves as a reminder of who "the man" is.

I'd hoped to spend some time with the Springfield News-Leader and had hoped an invitation to watch the News-Leader Editorial Board in action. Unfortunately, my request was denied, but I was able to scrape a quick video interview with Green County Sheriff Jack L. Merrit (Tony Messenger's arch enemy) which I'll be posting shortly.

The division of Springfield's CBS and FOX affiliate (KOLR & KSFX)isn't as distinct as "the other" dual network broadcasting company in Springfield would like their particular marriage to be.

KSPR (ABC) and KY3 (NBC) are supposed to be competing, which creates an opportunity if the rice paper walls don't fade away this year. As a result, I've been nudging Ron Davis to pick up coverage in Taney County. This is particuarly important when it comes to court coverage as KY3 retains the right to determine who will have access to the Southwest Missouri Judiciary.

KOLR was the first to open a Branson bureau and the Springfield News-Leader had a Branson bureau for 15 years. At this point, no networks have satellite operations in Stone and Taney Counties.

There's been a move afoot in the greater Springfield Market. The move involves paying less attention to the Branson community.

Theres an expression commonly used in journalism - follow the money. If we're following the regional money trail it leads to Branson and would seem the bottom line would entail acknowledging Branson as part of the larger community.

Branson reported record earnings while other local governments have had to scale back services this year. The majority of tourists coming to Branson drive through Springfield and regional travel benefits both population centers.

To be fair, it was an acknowledged failure of Springfield based media organizations that caused a contraction and focus towards the activities occurring in the heart of Springfield.

On the surface it appears the Springfield market is producing more local content, reacting well to competition and would benefit from focusing more energy to the southern part of their broadcast area or.....