My memory of Tom Lantos 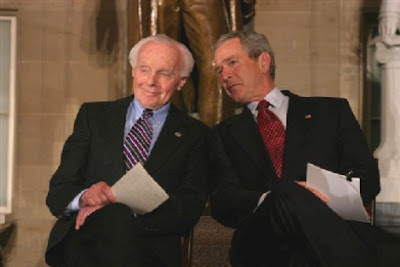 Tom Lantos led the most fascinating political event I've ever witnessed in my life. A political animal by nature, I've studied and watched movement action and government debate since the early days of my youth.
A few years ago I watched a live broadcast of the Congressman from California took on the top technical leaders in the United States begging, "I don't know how you can sleep at night".
Mindful of the Nazi concentration camps he escaped twice from in his youth, the Hungarian native pounded the CEO's of Microsoft, Google, Yahoo, AOL and Cisco took the stand while Lantos forced the tech giants to confess their sins against democracy and freedom worldwide.
Perhaps the most surprising was Google, the third giant to succumb to censorship in a perverse fashion (Microsoft and Yahoo were first to compromise human liberty vying for a chunk of the Chinese market). The Chinese government never officially told Google to censor words such as Democracy and Freedom - not through a list of outlaw conocepts provided by the government but rather censorship based on the values they felt the Chinese government wouldn't appreciate. It took Western minds to implement suppression of speech and notions of unalienable right for the current Chinese regime.
The technical infrastructure was provided by Cisco giving a network interface to local Chinese police agencies, enabling them to control Internet communication and initiate arrests at a local level. Yahoo turned in a journalist to the Chinese government because of his philosophical dissent to China's regime. The reporter was arrested - possibly executed - through companies and technologies Made in America.
One horror story revealed to testimony to Congress involved a man who was severely beaten - inches from death - and being bound while all of his equipment was taken by the Chinese government. After details of the incident were revealed we learned the man who was nearly killed for speaking against the Chinese Government lived in Atlanta at the time of the incident.
Lantos reminded me that democracy was alive, that their was evil in the world that needed to be combated. He was a reminder of hope having survived rule from the two largest genocidal governments the world has ever seen (Nazi Germany 11 million and Lenin/Stalin Soviet Union 15 million).
A quorum of the greatest technical leaders of our day dropped their heads - convicted - apologizing - having served against the interests of freedom - having helped create cogs for the machinery of oppression.
Mr. Lantos was a survivor, a hero, a man who stood by his beliefs, a champion for democracy, freedom and human rights. He reminded us about the necessity of endurance when all seemed to be lost and for a moment served as our national conscience as our country's top technical leadership lost theirs.

Morally you are pygmies...an appallingly disappointing performance. I think we cannot begin to tell you how disappointing Mr. Yang's and your performance was...attempt to obfuscate and divert...outrageous behavior."