What about John Edwards? 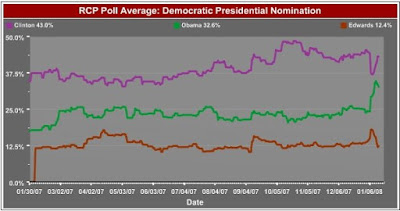 The Kansas City Star asked readers, "Why is John Edwards still in the race?"
While our team of journalists invaded the inner sanctuary of presidential campaigns in Iowa, I was able to spend some time studying multiple campaigns. Of all the presidential candidates Edwards attracted the organization and support of the traditional Democratic base. Yesterday, three of five interviews with the Steelworkers Union were posted on the Presidential Politics website. A few more from campaign Edwards will be posted later today.
The Unions setup special offices in Iowa to campaign for Edwards. No other candidate had this type of visible, parallel campaign effort in Iowa. The problem is, Edwards didn't seem to be recruiting neither new demographics nor new voters.
While Barrack Obama brings new blood the game, Edwards has the solid support of "Old School Democrats"
From watching Edwards rhetorical approach during the debates and negotiations in the Democratic party; I believe it's likely we'll see Edwards run on an Obama ticket.
Other than that, like the other candidates, Edwards believes he can make a difference.
Prepared by: Unknown