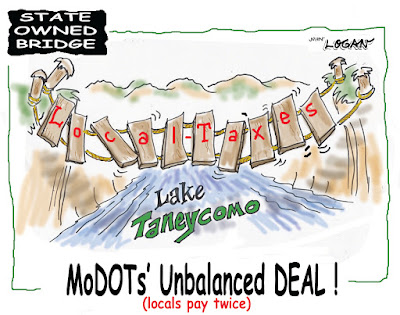 (Cartoon by John Logan) Civic leaders in Hollister and Branson placed a questionnaire at their respective city halls asking citizens how a temporary closing (up to a year) of the Taneycomo bridge connecting Hollister and Branson would affect them. Though lacking any scientific method, survey respondents overwhelming stated that closing the bridge would cause a substantial inconvenience.

Logan argues citizens have already voted on whether or not they want a tax to invest in a bridge - Proposition A - which voters rejected. Though the bridge wasn't the only project the proposed tax was to fund; the marketing effort by those promoting the tax dubbed proposition A - "The bridge tax." Some speculate the combined special interests behind the tax were the reason the legislation failed by vote of the people.

The Taney County Commissioners and both Branson and Hollister Alderman have been negotiating with Missouri's Department of Transportation (MODoT) over financing improved infrastructure to the route connecting Branson with Eastern Taney County. Logan argues, the bridge is the property of MoDot, infrastructure improvements are the financial responsibility of the state of Missouri and the citizens of Branson have already payed for the bridge through taxes paid to the state.

*******Jan,. 24 Update***
John Logan issued the following statement this morning.
Please understand, I realize we disparately need a bridge, HOWEVER, we also need to be very afraid of precedents being set on "double taxation".
EXAMPLE:
This county paid $two million "plus" to bail out MoDOT on the expansion of
Hwy 65 to the Arkansas line! (Which is needed!)
Now we are paying $eight million "plus" to bail out MoDOT on a new Bridge
over Taneycomo. (Which is needed !)
PROBLEM:
Citizens of Taney County have already PAID MoDOT for roads and bridges thru state taxation.
Now the Citizens of Taney county will pay AGAIN for the bridge thru their local and county taxes. (The only source of revenue government has is taxes)
* Where is the Division of powers?
*What is wrong with MoDOT leadership ?
*Why aren't our LEADERS raising "billy heck" in Jeff City?
*Why the artificial 'deadline" set in February by MoDOT?
*Why add traffic to Branson Landing Blvd and ByPass downtown?
*Why are these millions of dollars being spent not by a vote of the people?
*Why is Taney County (a big tax provider to the state) being drained by MoDOT?
*Why does a Round-a-bout on 248 have priority over a needed bridge?
*What other counties build state owned bridges for MoDOT?
*Why don't our citizens NEGOTIATE harder?

I realize these are hard questions, and the Bridge is VITAL...but seems to me like the state owned bridge is getting is getting the GOLD...and the Land of Taney is getting the SHAFT.
It sure is nice that Americans can gripe...but, I have done my fair share of good things in community service...so NOW I CAN FAIRLY GRIPE.
Thanks for Listening, John Logan
Prepared by: Unknown