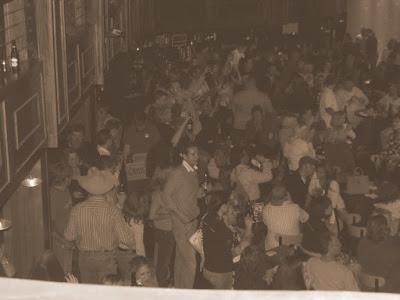 Last year, KY3's political reporter David Catanese caught flak for having a political sticker on his desk. As a joke, I decorated the back of my laptop with political stickers perfectly divided - Democrats to the left and Republicans to the right.
While in Iowa, as part of my research I stopped by the political headquarters of several presidential candidates on a daily basis.
Propaganda was collected at each location. During the last democratic lovefest/debate Hillary Clinton and Barrack Obama traded pleasantries to convince the general public that race and gender weren't a factor. Of course, pundits estimate the lovefest will end soon as the political boiler begins to heat.
I thought that it was important to point out that both camps were generating race and gender based materials. If you click on the image above you'll notice African Americans for Hillary and Women for Obama stickers created by their respective parties.
They were the only two candidates that generated race/gender specific marketing materials.
Last year the Branson Landing threatened to penalize kiosk vendors who closed during the ice storms. Branson Landing management charges fines to stores who don't keep hours consistent with Landing standards. This year the outdoor mall is void of kiosks, but apparently some businesses are now allowed to alter hours during the winter months.

The majority of shops are still open during the winter until 7p.m. providing a treat for those who hate long lines and the hustle and bustle the rush of peak season shoppers brings.

(The photo posted above was shot at Ernie Biggs during a photo tour by Darin Codon November 2007)
Prepared by: Unknown