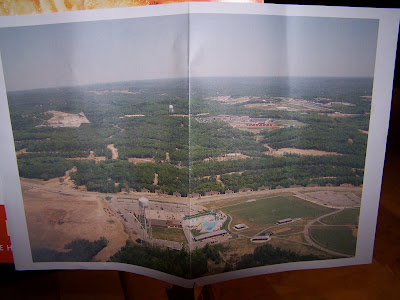 (Branson Missouri Rec Plex Photo Click image for full view)
Gov. Matt Blunt signed an initiative to protect Missourians from TIF's today. Tax Increment Financing = developer subsidies. Taxes are deferred to pay for the cost of infrastructure development.
Branson City Administrator Terry Dody has brought up the Kansas City situation as an example of how TIF's helped Wyandotte County Kansas and Jackson County Missouri got screwed (again).
Apparently, Wyandotte offered a TIF and Jackson County didn't. In the end, the severely depressed Kansas side of the border scored a few million in infrastructure. Soon, perhaps weeks, a casino will open on the Kansas City side of the border.
At the Lake of the Ozarks, Hammons promised to pull out of a development deal if the city refused to support a TIF.
In Branson, Rick Huffman and HCW have snagged a couple really good TIF's. They pulled a one up. Today, during a planning session, Huffman offered some property adjoining the Rec-Plex at over 100 times what it cost just years ago. The Rec-Plex is a state-of-the-art recreational facility in Branson. The city invested millions and a few hundred thousand more for roads. They had to build a road to get to the facility right? The infrastructure cost was paid through tax dollars. Next, Huffman got blighted status on this prime piece of property. Citizens benefited by getting a Wal-Mart ... yeah, lots of people upset over this one. As you can see from the photo above, which was used in a presentation today at Branson City Hall, the area was pristine. Justification for the TIF was furry animals could drink out of the natural ponds (housing vermin). Oh yeah, their were no lights in the forest...(yeah, I know). After the infrastructure was funded and the mini-Disneyland was placed on the property, a plan to build a "Senior Living Facility" was unsuccessfully put in motion. The idea didn't pan out as well as the developer might have liked. The Rec-Plex wants to expand and Huffman wants to sell the acres adjoining the Rec-Plex (see the discolored plot next to the Rec-Plex above) for a whopping 11.2 million dollars.
TIF's were initially a way to boost Missouri cities plagued by displaced industry but the legislation created a loophole that has become a carrot for developers. A lot of the time, knowing they can get it elsewhere, they won't invest in a project without one. Under the guidelines, any forest or park could be considered "blighted."
Imagine how the National Rifle Association would feel if all hunting land was marked in this manner - thus the legislation.

____
Background: Kansas City, Missouri getting screwed by Kansans is a fact of nature. TIF or no TIF - KCMO would get the raw end of the deal. It happens every time.
Prepared by: Unknown