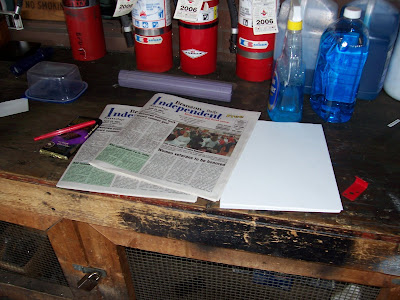 The Branson Independent is one of three newspapers distributed through Ozark Mountain Newspapers. Branson, Missouri has a unique market and demand for content is far different from the rest of Taney County. On the east side of the County a weekly paper called the Taney County Times has decent distribution. Silver Dollar City sits in Stone County which is covered by the Stone County Gazette.
I handle each medium differently. Here, I rarely edit and speak in 1st person (obviously that's inappropriate for a newspaper). As a reporter I don't think it's my job to insert opinion and try hard to present conflicting sides of issues. While taking a tour of the city with Branson's newly elected government officials I saw the Branson Daily Independent at every government facility. It left an impression on me and reminded me how important it is to be a good custodian of fact.
A couple weeks ago, while at a city planning meeting I let some frustrations come out. I've been pressuring the city of Branson to transfer digital information as opposed to print. It wasn't happening quick enough and I spoke sharply to a group of high ranking city employees. I had been up all night and walked nearly 12 miles before the meeting began. Thing is - in the backround these city employees were probably working hard to help me. Forget the requirements - what's owed or what I can legally demand - I believe they were trying hard to help me - which means a lot in my book - and by criticizing them by making my demands in a public setting was discouraging to them. I've felt horrible about that since the meeting.
Being a reporter means tearing down walls and cutting out windows but unnecessarily hurting people in the process...not who I want to be or what I want to do. Failing to report vital information to the citizens who trust you - thats equally harmful and one far more frequently committed.
Prepared by: Unknown