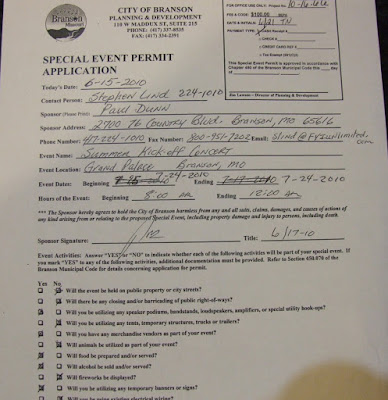 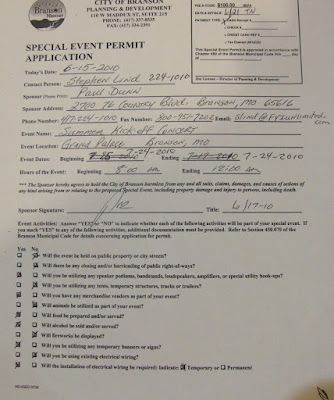 In order to add transparency to the journalistic process source documents are posted above. Updating throughout day
Branson's City fathers are frowning on Branson Mayor Raeanne Presley who commanded the city's public relations department issue a press release that has proved to be of a fraudulent nature.
Rumblings in the backrooms of Branson City Hall prompted a post here on the  Branson Missouri Blog July 6th asserting that Presley's censorship efforts were waning.

Outside of a regular meeting, during a planning session, city leaders came to consensus and rejected a permit claiming Grand Palace owners posted an announcement for the event before a permit was filed. As demonstrated, the release was a dishonest statement.

Apparently, Lawson asked Dunn to fill out another form in July a month after the original was submitted and 20 days after the city of Branson has the ability to protest according to statute.

At the order of Branson Mayor Raeanne Presley a press release was sent to millions of people across the nation. Under contract with the owners of the local ABC and NBC affilliates KSPR and KY3 Presley currently has complete control over content distributed over a Branson television channel.

Preliminary data suggests the accusation that Dunn didn't file a permit before July was distributed across hundreds of media outlets nationwide. The press release also provided a number of "hoops" Dunn had to jump through to get a permit to hold a concert outdoors. Dunn complied submitting response to the concerns 48 hours ago. The city was open producing the document for public view after this post was initially published

Gang of Mayor and Tax Funded City Employees Pressure Dunn in Private Meeting
**At Dunn's request information about a meeting with city leaders previously posted is being pulled. Dunn didn't deny the facts of the meeting; but wanted to protect other members of the community who may be harmed by the information. The information will be published at a later date after appropriate clearance is given.

In order to censor "un-Presle"y approved exercises of free speech and specifically to block an annual event titled, "Promenade of Stars", the board of alderman, led by Presley's command changed the "right to assemble" from a neutral process to one which the mayor can reject.

Presley Censorship Act of 2010
The ordinance change is contained in section 450 of the Branson Municipal Code known to civil rights supporters as the "Branson Censorship Act of 2010" forces approval of permits for outdoor gatherings from the parks board to Jim Lawson's department. Lawson came on board in April after a whistle-blower who accused Presley's administration of fraud was fired.

The event is a Macy's type parade where internationally recognized stars and some of Branson's lesser known acts such as the "Presley Cave Jubilee" are given national airplay.

The Branson Chamber of Commerce figures estimate the parade is worth millions  in revenue and unlike the Presleys, doesn't require tax funding to market aka finance.

City officials confirmed that last month  a meeting was held at city hall which included a representative from the Branson Chamber of Commerce to negotiate with leaders who have been working to censor the event.

Bartlett's application hearing is being held in August. The issue of whether Presley has the right to censor free speech in Branson has not yet been challenged but disrespect for the veterans who have fought and died for the right is inherent.

Unfortunately, individuals with specific business interests are participating in an ad-hoc process which flagrantly violates 1st Amendment rights. According to the Constitution of the United States the right is granted by the almighty not a business competitor.

Dunn Protests Denial of Nelly Outdoor Concert Application
On Wed. July 21st at 10:36 a.m. Dunn submitted documents appealing the decision. In the  48 hours prior Dunn received a note of support from neighboring businesses which included Andy Williams theater. Other issues including parking were also resolved and supported with documentation.