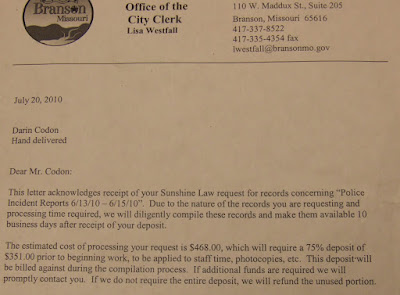 The Constitution states that every man has unalienable rights granted by our Father-in-Heaven. Such a profound accusation as to the rights of men has never had so great and profound effect on the state of mankind in relation to rule.
In theory, open government protects our rights. It allows men to exercise the right to "press". To press, or to publish enables self-rule as it provides information we need to govern ourselves. As an American, we are supposed to be a Republic ruled by representatives we elect. In order to elect the proper people we need to understand the workings of our public bodies - those who use our money to serve the people - or in some cases , launder it to their private investments.
Because malfeasance is probable with the stakes as high as they are i.e billions of dollars, imprisonment etc., laws regarding government bodies protect the availability of information. For news organizations the dialogue about democracy has another function , it generates cold hard cash.
If the government blocks the tools of democracy by distorting or not complying the open government laws a free-press goes out of business. The economics of a free-press have profound implications on the product citizens have in terms of news.
Distrust of the press has reached a record-high.  Thorough exploration of this topic would take volumes more than will be posted in this story; however, it's important to note that the majority of local publications utilize a government officer self-reporting method.
This means politicians themselves report exactly what they want to be published ans the stories are run unabated. Information distributed through press releases is an important component of reporting but the practice of citing these sources has been an act of irresponsibility commonplace in regional publications. It also enables corruption as distasteful politicians can instruct news outlets print information they want the public to be aware of and hide information they don't want the public to know.

If we're doing our job correctly, we take information we're given and process this through a system of verification. A statement is an assertion of fact on its own and commonly appears in newspapers in the form, "so and so says such and such".

In many circumstances this is the only way to report an event; however, in many cases its the result of laziness as the tools to confirm or deny facts exist and can be communicated by those who choose to protect the public record.

The document above is a response to a request for incident reports from the Branson Police Department. Under Missouri's Sunshine Law the Chief of Police is a government entity subject to the Sunshine Law on his own,

If a government body doesn't want to protect access or reduce civil rights to information they can do one of three things.
1. Raise Taxes or Fees For Information (Such as charging $468 for two days of reports, poll taxes or Presley's new freedom of speech tax)

3. Subsidize competitors (Over the past two years Presley's business partners KY3 and KSPR have fees waived and access without charge to city resources unavailable to other outlets)

Though some of these methods demonstrate corruption when access to information is being intentionally withheld utilizing these tools it sends off a warning flag that something is very wrong on the public dime.