Commentary after being detained for refusing to delete a photo - God, Government and Press Politics 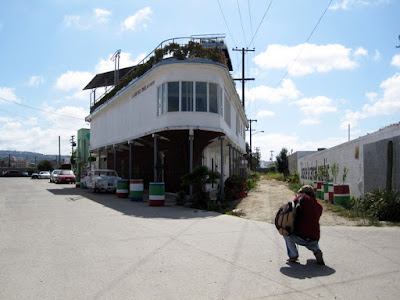 The photo posted above was taken in Tijuana. To the right a fence runs westward. The house in the photo is called "Casa del Tunel". The location, just a few meters from the border, once housed an underground path used for smuggling drugs and humans into the United States. Contraband trafficking from Mexico is well known through the reporting efforts of our national press.

What isn't well known is that a form of contraband flows south from the United States to Mexico. Newspapers are printed in San Diego and flow into Baja California, Mexico where reporters are killed without consequence. A press pass is a great way to verify death certificates and San Diego provides a haven for international democracy because the founding fathers of our great nation created a living document promising a god-given right to print aka to press. Mexican publications print in the United States where the Mexican officials can't thwart their efforts.

I am more than keenly aware of my rights as I navigate the border and act with care as I engaged the locals to discuss the politics of Baja California. The politicians buy out the papers as quickly as possible to prevent them from reaching the people and the citizens of Mexico treasure the words of integrity imported from the United States of America.

The press, as our forefathers understood,  prevented totalitarianism and preserved the gifts God graced upon his children - mankind. After all as Paine professed it is the path of politicians to put themselves upon pedestals both symbolically and literally to prop themselves above God.

I've been fortunate enough to earn among others a White House press understanding a company affiliation was not the criteria our forefathers intended. Thomas Paine was not a corporate whore.

To circumvent corruption Mexican law, as most of the free world, prohibits politicians from owning equity in media companies. The relationship that KY3 and KSPR have with Branson's mayor would result in criminal charges as its impediment to democracy is acknowledged as substantial. Without filter or attribution many media companies are printing politico produced material. Several fraudulent statements have been broadcast through our airwaves and television cable because corrupt leaders are enabled the privileged of dictating what media companies tell the people. Whether it's due to laziness or outright participation in corruption is debatable, but the consequences are apparent and their revenue is dwindling.

The most tragic component of the decline of a free press is the disrespect it renders to our forefathers. Journalists without borders published a disturbing fact about American freedom. A study they conducted ranked the United States as the 36th freest press.

And in their last breath in a foxhole overseas I'm certain a whisper was never uttered to a dying veteran, "Thank you for dying to make us the number 36".

Their are soldiers in Iraq, Afghanistan and others stationed throughout the world. We have soldiers here too. When you hear a sermon from the pulpit know this too is a 1st Amendment exercise. And when those who hate freedom take control of nations they do so with the help or slaughter of both religious leaders and journalists - after all these are ambassadors of truth which inevitably sets people free.

I carry no physical weapon only a sword of truth and my shield is the constitution. Each time I've witnessed leaders disregard the constitution assisted by the corporate press I see this tremendous disrespect for those who payed the greatest price so we may live, worship and communicate freely.

Yesterday I attempted to speak with a prisoner being held at the Taney County Jail. I had no expectation of actually meeting him during this visit but was practicing due diligence. The accused murderer had an 8 1/2 hour standoff with the Branson Police and I wondered "What was this guy thinking". The public wanted to know.

I took a picture in the waiting room of the jail. An officer yelled at me asking me to delete the photo on the way out. I was apologetic but stated, I can't do that. It was only a photo of a panel that I believed depicted the high-tech nature of the facility, but the principal was greater than my own self-interest. I didn't believe the authority had the right to censor against the rights many of my family member defended - no right to take suspend the 1st amendment.

The camera was ripped out of my hands and harsh words were spoken. I was detained in the lobby and accused of a variety of things before a supervisor came into the room and made me turn the camera on and show him my photos.

I can't say that I wasn't terrified and wondering if my small defense of civil liberty was worth what pain I might endure. Having been detained after making a request to the police department once I learned clearly what can happen if the courage to seek the full truth is applied to a government body armed to the teeth with weapons. Was my constitution valid or would I be detained for an extended period of time? I was horrified as my imagination roamed through the variety of scenarios faith in the constitution could manifest.

The second official said he needed his supervisor and a twenty minute conversation ensued outside. A judge and a sheriff would determine my fate.

By this time the jury of police officers rose to five and the highest ranking supervisor entered the waiting room where I was being detained.

Taney County Sheriff Jimmy Russell confirmed my right to shoot photos in the lobby of the facility and my right to keep the image remained.

But their was a caveat. It was explained to me that no members of the press are allowed to interview inmates - it was nothing personal - the policy was affirmed when a KY3 reporter tried to interview Pete Newman a month earlier.

I spoke with the officers about the importance of the constitution and have found law enforcement official invaluable to assisting citizens with understanding the communities I cover. They too allow us to be free. As policy, I print at the request of local law enforcement authorities so they can do their job - unlike my brethren in the trade - I disclose the source correctly labeling the source.

I hope the Taney County press policy changes and don't like the idea that a press pass now limits me from unfettered access to the public jail. At the same time I have comfort in knowing that other people in my profession will not endure the same fear and humiliation that I felt when they enter the waiting room.

I thank God for the veterans that preserve this freedom and abhore those politicians and corporations that plot against the liberation of information for profit and social gain. This works for a moment but quickly erodes the public trust.

By giving our natural rights to irresponsible corporations and by allowing them to refrain from confirming truth and blindly regurgitating false information, they pervert justice and will continue to see the financial decline and lack of public trust we see today.

Two years ago I made a major mistake.I denied assistance from two attorneys that offered to help battle the illegal activities of the Presley administration. I chose to protest by breaking format. The small window started a chain reaction and an opportunity for some that hate god-given and constitutionally confirmed 1st Amendment liberties. Some of this damage and attempts to harm my ability to perform my duties linger today.

In retrospect I should have remembered the promise of America's first journalist Thomas Paine that leaders will through their actions put themselves in a position that denies God's gifts to men.

Perhaps, keeping this in mind I wouldn't have taken for granted that the rights my forefathers fought and died for have to be preserved today. Fortunately, they can be settled in the court room if inspired men choose to honor the graves of those who died for freedoms we enjoy today.

Rousseau said, "Man is born free but everywhere he is in chains". It's my hope that I can be a small part of liberating men by liberating the data that helps us remain free, giving us knowledge we need to remain self-governed.

My freedom was suspended for an hour but my duty is to serve the quarter of a million people who have sought my works for information about the political bodies responsible for serving us.

I pray to God our liberty will be preserved and that one day we will regain the honor of the freest press in the world. We owe it to those who made the ultimate sacrifice and those who continue to make sacrifices for our freedom today.