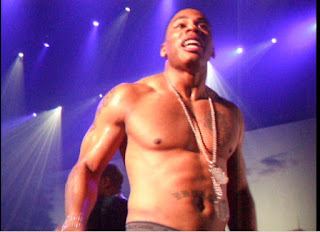 The Declaration of Independence holds that the rights of men are granted by God not to be disturbed by men in leadership positions who deem themselves superior to the creator and attempt to violate and steal the gifts God freely graces everyone.

The first and most fundamental god given, constitutionally affirmed right is the American security of speech unabated by government.

What Paul Dunn believed before attempting to bring Bransons first hip-hop artist to Branson is that our current mayor Raeanne Presley had no respect for the rule of law, conflict of interests nor the creator that grants men these rights. Presleys behavior proved Dunns assessment correct.

Having experienced the perversions of our honor-less leader firsthand and on a continuing basis it was redeeming to see Hip Hop artist Nelly take a stand against the corruption of Branson's current leadership.

Nelly's sentiments to the Mayor and Branson Board of Alderman were elegantly displayed in the final moments of the concert where Nelly said,

To all the families in Branson who want their children to grow up with  civil liberties retained, to those  who love freedom, to those who believe in a God of love as opposed to one of bigotry, and to those who've watched their rights violated at the hands of a leader whose moral compass is her personal pocketbook, Nelly's actions were family friendly. They are far friendlier than the word "no" given to Dunn when he attempted to exercise his right to assemble.

After Nelly dispersed his words of wisdom upon the crowd the music began and the crowd chanted as Nelly stretched the microphone to the crowd singing, "Nelly, I love you, I do...." These words will never be spoken at Branson city hall where no love is given to private enterprise.

But before this act of redemption for those who've had their civil rights stole at Presley's command, Dunn had to walk through a fire.

Ten days lapsed between the time Dunn filed for an outdoor event permit and began the negotiation process with Nelly.


Negotiations were intense as Nelly communicated through a business manager by phone from a hotel room in Las Vegas. Nelly wanted full payment in cash but eventually settled for half of his total payment before shooting a video with Dunn to announce Nelly would be appearing in Branson.

The video was released on July 4th, Independence Day and an elaborate hand was devised by an anti free-market administration which currently resides at Branson city hall.

Dunn kept two words out of his initial "Summer Kick Off Concert" permit - black and rap.

Jim Lawson, who was hired after a whistle blower who accused the mayor of corruption was fired, asked Dunn to sign one more piece of paper when he arrived back in Branson.

The city gave no indication that there was any problems until days later when the mayor showed up mafia style at the Grand Palace with several city department heads.

The taxpayer funded gang informed Dunn that the permit to have an outdoor concert was being denied.  According to Dunn, Lawson said, "we would never allow a permit for that kind of music. An act of intimidation ensued as Police Chief Carroll McCollough squeezed Dunn's hand hard enough to bruise but Dunn refused to be intimidated smiling at McCollough stating, “that's the hardest handshake I've ever felt”. An aggressive act to financially harm Dunn was already in effect.

Illustrating the problem of a trend where media outlets allow unfiltered airplay of press release self-reported by government bodies, a document writhe with fraud was distributed across the nation.

Presley's efforts briefly caused concert tickets to come to a grinding halt. It was intended to be a business death blow distributed in full by her business partner KY3inc and partner affiliates KY3 and KSPR..

The Fraudulent Press Release
Branson is so slow in late August that the Mayors theater is being shut down for 21 straight days - the city said parking was an issue, but Dunn's proof of ample parking fell on deaf ears.

There were no plans to serve alcohol but Presley reported in the release one reason Dunn was denied was because he didn't have a state license to sale beer.

The city said they were protecting neighboring businesses but all the neighbors including Andy Williams theater granted both support and permission.

The truth is Bransons city leaders never intended to grant the permit and the false report distributed by Branson City Hall had nothing to do with the real reasons the permit was denied. There was never an intention to allow the concert, this much is clear.


Individually, with silent solidarity, members of the press who were aware of death threats Dunn received but kept it silent.
Internet chat rooms were filled with self-identified KKK members who praised Raeanne Presley and the board of Alderman for their decision to alter an administrative process that allows her to ban whatever speech our mayor wants to censor for whatever reason she chooses.
The board no longer discusses issues in an open manner but its important to note the behind the scenes conversation with board members focused on the partners and theater owner not the color of Nelly's skin.
In fact, the command to ban Nelly from coming to Branson was given to Lawson by Presley through her employee Dean Kruithof. Due to a removal of checks and balances the "staff recommendation" was actually one Presley issued.
Presley changed the law forcing the city manager to report to the Board of Alderman as opposed to representing the city. In other words, when there is a staff report to allow or deny expression of speech it's due to the fact that the mayor told the staff member to accept or deny the request. Legal counsel now falls under the same rule, under ordinance ,legal counsel serves the mayor and her board of lackeys as opposed to the city or citizens.
Over a million dollars in legal expenses have been buried due to a process where accountability to the citizens is a non-issue. In fact, the city of Branson claims only two votes have occurred from over 45 closed session meetings in 2009 and 2010.
As the community witnessed the soulless actions of Branson's Board of Private Business Interests (alderman) several establishments offered Dunn aid.
Following a failed attempt to file a restraining order and writ to force Branson to obey their own law, Dunn inked a deal with the Mansion theater.
Mansion theater manager and owner of Backstage ministries Steven Lind suggested the offer to Dunn was to prevent further bad publicity and and decrease escalation of discontent in the community.
Lind had no unkind words for his friend Mr. Scribner who was a partner in Backstage ministries until the Mansion decided to allow Nelly to perform.
Scribner was an opponent of the decision and left the ministry to protest Nelly.
Apparently, Scribner's call to ministry was nullified by Nelly as if God becomes powerless on Sunday if a blackman spits rhymes from the same location on Saturday.
The Southern Poverty Law Center notes the hate group that operates in the Branson area calls itself Christian Identity. Some of these groups appear to emulate Muslim fundamentalists more than any practice of Christianity derived from the Bible. They practice hatred, legalism, racism and promote violence then throw a cross on top to advertise their cause.
Several of these KKK styled 'white crosses were painted on the parking lot the night before the concert and painted over before concert goers started lining up at the door early in the morning.
At three in the afternoon on show-day sound checks started and the line outside reached over a hundred deep. Another two hundred arrived by the time the doors opened at 4 so fans could escape the 100 degree heat and enter the lobby.
------------To Be Continued--------------(Photos and Videos Currently Being Integrated)