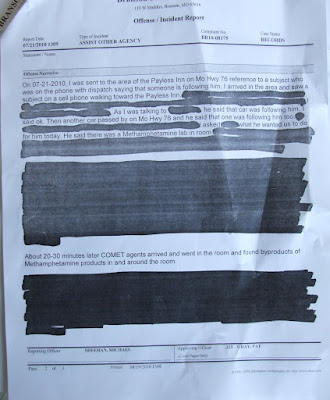 The document you see above cost over 40 dollars, was delayed several weeks and proved the criminal elements on Branson's streets have more integrity than the leaders we have at city hall.

Branson Police Chief Carroll McCollough went to great effort to cover-up the bust that occurred on Hwy 76 close to a mile from the mayor's theater on Hwy 76.

The meth lab bust occurred at the Payless Inn across from Music City Center and serves as a residence for mostly foreign seasonal workers in addition to housing some of Branson's poorest residents.

Word on the street was that three people were busted and that officials were looking for 11 more suspects. In order to allow the police to investigate and find participants, no Freedom of Information Act requests were made to the Branson Police Department until weeks after the raid was conducted.

The publication you're reading is currently the only Branson outlet where the journalistic process to cover stories is actively being utilized.

Witnesses claim amphetamines were being manufactured in two hotel rooms which were raided at the Payless Inn on the 76 strip.

The dangerous chemicals utilized to produce meth have traditionally resulted in a Haz-mat team entering the facility to clean -up before citizens are allowed to enter the building.

None of the mostly black residents were evacuated nor has an incident report been discovered by local health officials.

Branson Police Chief Carroll McCollough was issued a Sunshine Request Form through Branson Police Department two weeks ago. The document asked for Meth Lab Busts on or near the 22nd of July. McCollough waited until the maximum time allotted by law, After the unnecessary delay McCollough asserted:

"We checked the record and found there were no Meth Labs found in Branson on the 22nd, 23rd or 24th of July"

At a community overhaul buy-in meeting Branson Police Chief Carroll McCollough accompanied by Branson Mayor Raeanne Presley and real estate agent Karen Best were present when I tried to pull McCollough to the side to ask if publishing the report of the meth bust was being withheld for investigative purposes.

McCollough was arrogant in his response publicly acting in a humiliating manner.

A specific query was made for all "drug related" incidents on the 21st of July. The documents had 90% of the information blocked out for a charge of $10.70 and a week delay.

While most people believe this information is a public record I'm currently being charged for the time it takes for the files to be censored, printing costs, research time and the documents are being held for 72 hours every time a request is made.

While most American municipalities are obedient to state and federal laws that allow access to incident reports, Branson's leaders are actively censoring their activities through price gouging, censorship and in many cases outright lying.

Slowing the meth industry is a noble cause but if it puts innocent civilians in danger we should reconsider our methods.

Though many people believe government corruption is inevitable it should never be accepted, ignored or encouraged as it puts each of us and democracy itself in danger.