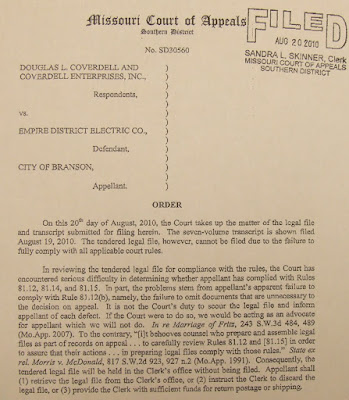 Missouri's Southern District Court of Appeals rejected an appeal filed by the City of Branson whose arrogance was returned in kind for a secondtime. Two attempts to disassemble a Taney County's jury decision regarding land on Lake Taneycomo have failed.

A large percentage of the Branson Landing was granted to Doug Coverdell by a Taney County Jury early in the year sparking multiple public displays of arrogance that has cost the taxpayers to fork an estimated cool million dollars this year in legal fees alone.

Empire District's attempt to silent title on a portion of the Branson Landing lakefront began a seven year saga  which includes a pedigree of legal consultants which reads like summation of the Southern Missouri Bar.

Negotiators for Coverdell revealed under condition of anonymity that two offers have been made to the city of Branson's board of alderman. The first was $25,000 and the second $200,000 which the board rejected failing to put the vote of the record.

The decision to litigate has cost the city a pretty penny, much larger than the original amounts Coverdell offered to avoid a long painful lawsuit - which the city and Empire District Electric have pursued despite continual failure to legally dispute Coverdell's claim to a large plot of land which includes portions of the Branson Landing.

Missouri's Southern District Court of Appeals was kind by granting an extension for the city to get their files in order. Thursday August 19, 2010 was the deadline for the city to file an appeal. Empire District filed an appeal as well with a similar reponse from the court. Empire has 10 days to get it together.

Apparently, the disrespect Branson's Mayor Raeanne Presley and Branson Board of Alderman have shown citizens and competitors in the marketplace proved contagious peeving the judicial.

Unbecoming behavior toward  appellate staff were returned in kind. The court stated "It's not the court's duty to scour the file and inform appellant of each defect" after informing the city of Branson that rules 81.2, 81.4 and 81.5 prohibit the city from failing to "omit documents that are unnecessary to the decision on appeal".

The tone of the court screams loudly at the end of the appeal where Branson's rejected file is treated much  like  Presley has treated minorities who want to perform in the city.

In rejecting the documents the court says they won't accept the file and the City of Branson can come pick it up if the want to. Otherwise the court offers to throw away the document. The city is offered a third option, they can have the document mailed to them under the condition that they provide money for postage - harsh.

At last the court is kind giving the city a brief opportunity to hand a document to the judicial worthy of a response.

Moreso it's an opportunity for Branson's City leaders to grow a heart and brain, two elements the governing body has been lacking. The failure to treat the aggrieved party with common decency and dignity has cost the city millions of dollars and could cost the city many millions more if they continue to disregard the tenants of common sense in their backroom meetings.