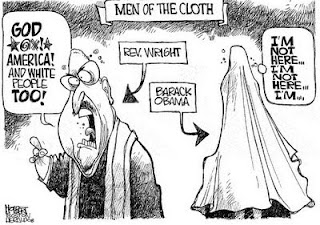 Jay Scribner tells Jann Clark of Ozark Mountain Newspapers his decision to quit preaching at the Mansion theater has nothing to do with "music style, race or the new venue being introduced. It has everything to do with environment".

Mr. Scribner appears to know little about Branson's history claiming, "It's established itself through it's long history as a wholesome family oriented place, Everyone needs to do a self evaluation to determine if its healthy and holy for Branson'.

Branson sits four hours from the original capital of the Confederate states (Little Rock, Ark.,) and an hour from the former headquarters of the KKK. For years, a "No Blacks After Dark" sign sat on the railway which goes through downtown Branson and Hollister. This is our history.

Let's not discuss the fact that the Presley's theater, which is owned by Branson's Mayor has never had a black employee (*could've had a token minority in the 60's) or their competitor "The Baldknobbers" has undeniable similarities with their KKK outfits.

Let's not look at the apostle Paul's ministry, after all, he was a murderer prior to being converted to the faith - certainly not the kind of guy we'd want visiting Branson.

Perhaps we should direct Mr. Scribner, former Jesus teacher for cash, back to the Presley's theater where he could analyze the "Liberace style attire" and educate us with a holiness rating telling us if the " homosexually inspired wardrobe" our mayor believes tax subsidies should be used to promote meets his standard of Godliness.

Let's make sure and kick Jim Stafford out of Branson too. After all his ode to marijuana, "Wildwood Weed" couldn't meet the "fictional historical holiness" standard Scribner professes exists in Branson.

While we're limiting free speech, perhaps Mr. Scribner should visit the churches in town and let us know which ones should be shut down. Who knows, a sinner might be attending.

Instread we should evaluate our prejudices, consider what it means to be an American and create a vibrant discussion about holiness, godliness, freedom, liberty and civil rights.

Who knows, if we allow free speech in Branson maybe someone will run for political office without being afraid of what the consequences will be to their private business.

Or better yet, maybe if we let a sinner come to Branson, you might gain a new church member. As my friend John  said:

Jay Scribner's position is respectable. He has the right to make a political statement and pretend to be holy. But, in my opinion it's dishonest.

After all his totally "non-racist" standard of Godliness doesn't seem to apply to the shortcomings of white people nor does it erase a dark history..