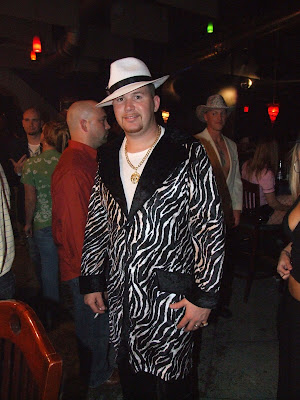 Joplin Schoolteacher and blogger Randy Turner is always talking about the big Branson money that pays off the Jasper Senator that represents him. Studying the Branson lobby has been a pet project of mine. This path led me to Tsunamis night club in the dark side of Branson called district III (not really so dark, but, if you like - imagine).
The truth is Branson has many lobbying interests and they're not all on the same page. But who, why would anyone from Branson want to pay off Gary Nodler? My quest led to the 'pimp and ho' contest just a block away from Nodler's top contributer. As it turns out, the winner of the contest is TJ (seen above). TJ is a hustler. He sells travel club memberships (if you don't know then you're not laughing). Thing is, travel clubs get in quite a bit of trouble from time to time with the Attorney General. Earlier this year, a record $1.9 million punishment was delivered to a Branson Travel Club. The judge, now retired, said the demonstrated ethics, or lack thereof, threatens our entire tourism industry. Many agree, thus the great divide in lobbying interests. TJ, winner of the Tsunami's Pimp contest, happened to sell Nodler into one of his products. TJ says, donations help keep "the man" aka "the Attorney General Man" off his back.
Prepared by: Unknown