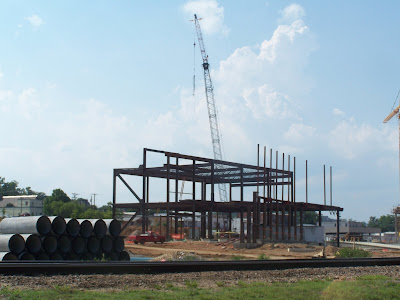 Larger view of photo 2006The photo's you see are of the Branson Landing construction site less than a year ago today. I'm posting live from Sullivan's after visiting Downtown Historic Branson. While the streets of the "new downtown" are bustling, the once tourist filled streets of Historic downtown are virtually empty. When covering the story last week I got heat from both sides. An elderly woman threatened me (an employee of the Downtown Branson Mainstreet Association DBMA) if I continued coverage. On the other side merchants felt my writing was biased towards the downtown association. Many of the merchants feel they're not being represented by their lobbying organization and a meeting last week with 35 irate merchants and the DBMA left only more questions.
When everybody gets paid, everyon's happy. Everyone isn't getting paid - particulary the downtown merchants. The once $37 million district has experienced wanning profits since the "new downtown" construction started. The convention center opening is just months away which brings some hope. A handful of merchants started an organization called the Historic Downtown Business Owners Organization HDBBO. They want to either force the DBMA to change their ways or split ways...Construction has been amazingly quick...see updated picture below. 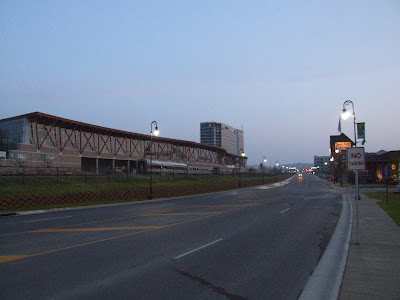 View of Photo 2007
Prepared by: Unknown