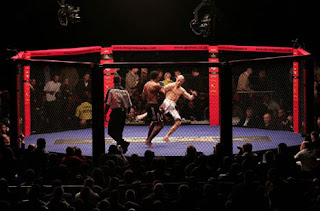 (Branson, MO) Some of the nation’s top Mixed Martial Arts (MMA) fighters will battle at the Hilton Branson Convention Center November 26th in an event billed as “Titan’s Rumble”. Tickets are available for purchase through the Midwest Ultimate Cagefights website (see link at bottom of article.

Athletes can earn victory through knockout, submission or decision. A technical knockout occurs when an opponent is stunned, submission at the will of a fighter and if necessary, a decision by three judges who will be scoring the event.

The United States Marines MMA program has the motto, “One Mind, Any Weapon”. In combat lack of lucidity is certain death forcing an end to the contest. Though combatants serve and receive hard blows,  the threshold for a technical knockout is low. MMA is one of the safest contact sports in America.

Training videos from the United States Army circa 1909 define the sequence of a typical match starting with striking and ending with wrestling or jui-jitsu. Full body boxing or striking is generally followed by wrestling a.k.a. grappling. Match sequences vary by the disciplines and skill sets mastered by participating athletes. Forty-five percent of fights end on the ground with a fighter surrendering (submission).

At Midwest Ultimate Cage Fights Titan’s Rumble, eight featured professional fights will compete in three 5-minute rounds with a maximum score of 10 points per round.

“Most rounds end with a 10 to 9 score, unless the referee issues a penalty, which is rare or there is severe domination in the octagon,” said Ross Swanberg, one of three judges officiating the matches. Swanberg added, “Rounds can be  won in the last 10 seconds with a rally of repeated blows.”

In a statement to MMA Weekly, Kimmons said, “Losing is not an option.” He demonstrated that resolve this year in Independence, MO, where Chuck Parmelee was submitted by Kimmons’ dealing a guillotine choke in the first minute of combat. Kimmons hopes to ride a streak back to the UFC for a spring match. In order to qualify for the UFC, Kimmons must win in Branson and take an additional professional victory. His fighting record boasts 24 wins and only 8 losses.

Kimmons will be challenged by Brandon Gaines of Miami, Oklahoma. Both Gaines and Kimmons are contractually committed to compete at 185 pound body-weight. Competitors must meet their designated weight within a mere one-pound variance.

Female Full Body Boxing - Freedom Fighter Rules
One of the most decorated female fighters in MMA is Springfield, MO native Jeri “Fists of Fury” Sitzes, who will battle Jessica “Bam Bam” Bartness of Seattle, Washington. For promoter Tommy Tran it’s a battle of youth vs. experience with two extremely aggressive fighters. “Neither has ever been knocked out,” notes Tran, who expressed it was a fight he was looking forward to witnessing.

Sitzes and Bartness will compete using the “8 point contact Freedom Fighting rules”. The traditional name of the sport is Muay Thai and is the most powerful striking discipline known to man.

Muay translates to “8 limbs” which identifies the different parts of the arms and legs available for  offensive fighting maneuvers. Thai means freedom and is the national sport of Thailand which translates to “Land of the Free”. While brutal warrior nations surround Thailand, it is the only Southeast Asian culture that has never been colonized. Thailand’s national freedom is credited to this distinctive fighting style and has been adapted in various forms by all its regional neighbors including Burmese, Vietnamese and Laotian cultures. The United States military utilizes the striking style as it delivers the most intensive impact pound for pound.

The striking style uses torque created by the rapid swivel of the hips to deliver blows with up to 1400 pounds of pressure, a force equivalent to the swing of a baseball bat.

Sitzes and Bartness exhibition will span five 2-minute rounds unless a fighter is disabled by blows. The rules allow for punches, kicks, knees and elbows delivered both above and below the waist.

Hometown Fighters Make Professional Debuts
Two Branson fighters -- Kenny “Hitman” Fredenburg and Bradley Hamrick -- will make their pro debuts at the Titan’s Rumble. In the heavyweight category, Fredenburg will test Matthew Foster. Both are scheduled to weigh-in at 250 pounds. Hamrick will challenge Aaron Mayes as a Superheavyweight each weighing 265 pounds.

Fredenburg was a Branson High School wrestling champion before becoming a decorated Marine Veteran. Fredenberg said, “Hamrick and I spend five hours training a day together, it’s an aggressive schedule. We spend more time with each other than most married people do.”

Fredenburg has ambitions to compete in the UFC and compares his pre-fight study to preparation for a chess match. After intense daily workouts Hamrick and Fredenburg spar, often emulating styles they are likely to face in the octagon.

***Content in this press release is available for use without further permission.
Prepared by: Unknown