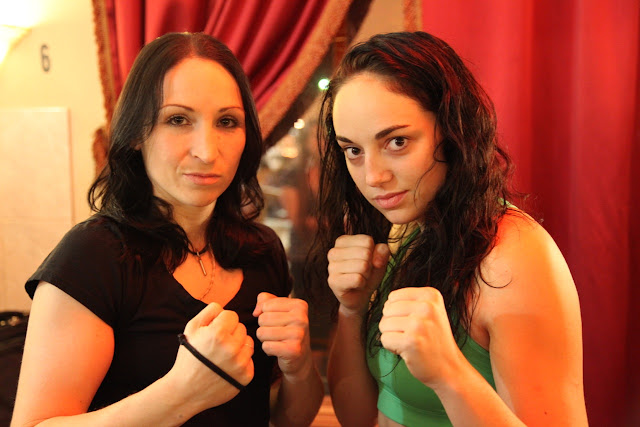 Jeri Sitzes and Jessica Bartess (photo above) will be appearing at the Hilton  Branson Convention Center tonight at 7:00.

Sitzes holds  a World Boxing Council (WBC) Muay Thai belt and competes in title fights with contenders from around the world. Though Bartness is a relative newcomer; she's aggressive in the ring and notes, "I'm happy to find a girl to fight with". Female fighters are a rarity but the trend is changing. Bartness started training for fitness purposes laying a path for what promises to be a fruitful career.

Though Sites is chased by those hoping to dethrone her from her title both her and Bartness generally spar with men. Sitzes wouldn't give names last night when asked for a list of  men she's beaten  during an interview at Hong Kong Buffet on Branson's famous 76 strip.

Like jellyfish, female fighters may look pretty but can sting - much worse than a bee.

Here's the thing. Outside of being skilled athletes, both girls come across as down to earth and, well, sweet.

It's a large contrast from male competitors who tend to be more emotional about their contests.

Sitzes lost her game face a few times during weigh-in last night with warm embraces with fellow fighters. She seemed to catch herself and retract - something that didn't come naturally. By nature these are skilled athletes with a proven ability to issue a beating while keeping their natural sugar and spice outside the ring.