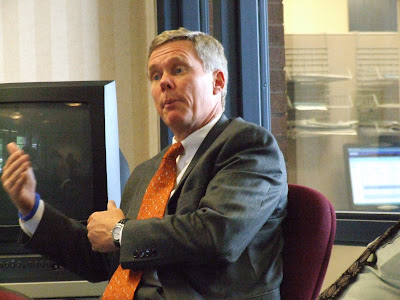 Mark Hartman, seen above (click for larger view) will be pitching for team Hilton at Branson's next city council meeting. The Hilton's parking arrangement is contained within HCW's contract with the city of Branson. The proposed agreement that will be presented Monday can be seen here for your review. Hartman will be charging a management fee on behalf of the Hilton. According to the document a "Manager" would be hired for $30,000 annually. Fees to park in downtown Branson would be established by the Board of Alderman. A suggested fee schedule was submitted by the representative of Hilton but isn't contained in the proposal for review. Currently, Hartman's salary is subsidized by the city of Branson for management of the Branson Convention center which is scheduled to open in August.
The issues of parking has been a hot button item for Branson government's 95th session.
The Downtown Branson Main Street Association (DBMA) has openly complained about the parking situation as have individual merchants. Last weekend the organizations spokesperson proclaimed sales were down which was aired on a regional televised news program in the wake of Branson Landing's report of banner sales in their opening year.
Hartman used the takeaway stating, "I don't care one way or another about the parking garage." According to Hartman, Hilton can provide a less expensive service providing staff on a per incident charge to the city as opposed to full time employees. Customer service is another advantage Hartman has promoted saying the Hilton is interested in the customer experience.
Prepared by: Unknown