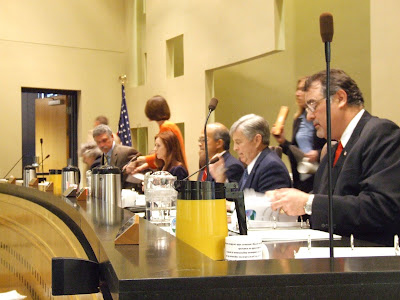 Branson Alderman Meeting
Branson Landing Update
The Branson Landing is on budget and on time. The reports are pretty much the same. Alderman Dick Gass affirms the timeline at each meeting.

Hear Audio of Branson Arts Council Request For Funds
Surrey Grand Crowne applied for a permit to reduce parking requirements. The issue ended up igniting a longer debate than anticipated. Aldermen voted 3-3 and the Mayor broke the tie.

Hear Audio of Debate and Mayor Casting Her First Vote

Bill 3416 Citizens on Patrol. The initiative resulted in extended debate. It allows citizens to serve on the budget, capital improvements and human resources committees.

Bill 3420 Audio Brief 248 Interchange Money
Sale or lease of city property on 76 and Fall Creek. Aldermen voted to not sale.

Discussion on the use of the name Branson outside of city limits.