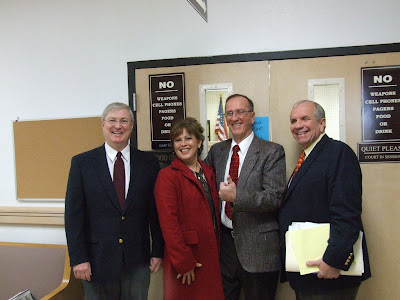 In this photo Tom Strom, wife Angelena Strom, Attorneys Don Ingram and Paul Weeks respond to the question, "How does it feel to be Mayor again?" We published a detailed article in the Taney County Times today giving the play by play. On friday, Ingram and Weeks called an emergency session and Judge Williams stayed pass regular hours and pulled Rockaway Beach attorney Barney Naoti into the meeting via phone. Weeks accused Naoti of prolonging the legal process and Naoti expressed his sympathies, "I dont like it at all". Apparently, Rockaway Beach failed to follow their own ordinances declaring Sue Riggs time as city father illegal. Some time ago I shared my opinion on the manner in a post.
The first thing Mayor Strom did after being reinstated was to call for the impeachment of Riggs and Naoti. An emergency hearing was set and a motion to close the meeting was called before it was brought to the floor.
Prepared by: Unknown