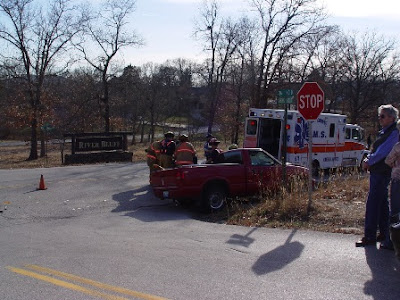 I don't often post car accidents or fires. Personally, it's just not my thing. I don't enjoy it but I feel a responsibility to report and document these events. At one time I would just email them to publications for their records.
As they say in the newspaper business - If it bleeds it leads. Yesterday, I covered a number of stories starting early in the morning and catching the 8:00 show at the Taney County Courthouse. Got some great stories. Next mission, the new Missouri Job Training center. When I got back to produce copy for the Taney County Times an emergency call came in. I was commissioned to cover a fire in Branson. The fire off fall creek road was small but I was soon to become the bigger story. The hilly roads make cars hard to see and as I was turning left trying to stay clear of emergency vehicles a car popped up and neither of us could escape. It could have been much worse. We could have died. It was close and I was scared. I was alive, a little banged up but what about the other guy? He was taken to the hospital and was released fairly quickly. It took me some time to find this out. I'm a little banged up myself - slight concussion - I know what this feels like from my football days. A newscaster at the radio station said ...we'll be easy on you. I demanded he do no such thing. I gave him the pictures and spent the evening writing copy for the Times. Like I said I was banged up - I still am and chances are if you turn on the radio in the Branson region you'll hear about it. Events like this make you think about what you really care about.
Before the accident I was thinking about Taney County Government, after I could think about is how much I want to tell my daughter how much I love her.
Prepared by: Unknown