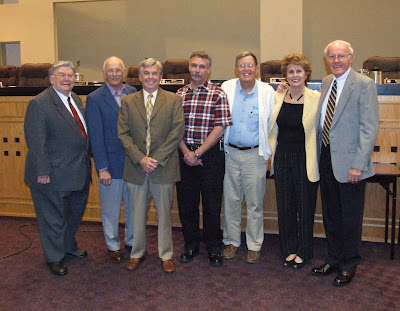 Branson Missouri Police Chief Carroll McCullough warned the mayor and Branson Alderman that this photo might appear on the Internet. I just wanted to make a note that this picture was submitted to the Branson Daily Independent but was beat out by a Giant Barn Swing ride at Silver Dollar City. David Edie and Beverly Martin plan to join a biker gang - well not really - but both plan on touring the US on motorcycles. Martin prefers Harleys while Edie prefers cruisers.
Being a public servant means being under fire. It's a choice and a noble venture. Though it is our duty to nitpick - it's for one reason (I hope I don't just speak for myself here). We do it to keep our nation free and self governed. That being said feel free to join the peanut gallery :).
In Love,
Editor
Prepared by: Unknown