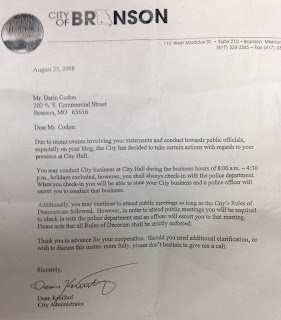 Dear Officer Reynolds
It was a pleasure an honor to meet you earlier this week. After our interaction I feel proud that you're in the community. I know I can count on you to honor my 1st and 4th Ammendment Rights.
Few people understand politics and constitutional law in the way you and I have to. The Bill of Rights is not some far off tool to use for rants or to boost myself. But in a vey real way it provides my income. It's such an important document that I figured it was worth investing in.
Some people believe that a free press means that KY3 and KSPR can publish what they want. While this is true, it is not a special priveledge allocated to King Presley's business partners. It gives every American the right to discuss, debate, attend church and press newspapers, magazines even blogs.
I've been impressed with many moves made by the department and have seen unit cohesion reach an all time high. Unfortunately , if cohesion trumps ethics we don't have a police force - we have a gang. I don't want a gang of thugs running around Branson issuing edicts to people we don't like.
The Bill of Rights was designed for people that we don't like. We don't have to worry about the people we love - we take care of them - feed them etc. Mother Theresa said, true poverty, is not for lack of bread but of love. Constritutional guidlelines force us to protect people we don't love. I cannot express the deep poverty I experience when my constitutional right are violated.
The City of Branson does not like the idea that I have first ammendment rights. I am taunted dehumanized harrassed, molested, disrepected, put-down, humiliated threatened and given edicts.
Your eyes were swelling the other day as you issued an Edict from King Presley regarding my 1st and 4th Ammendment rights. Corrupt leaders didn't like that we were talking. I was really enjoying your company and I think you were enjoying mine. We were talking - the first Ammendment helps us do that. Unfortunately, King Presley's edict , in a very direct right has stripped my rights through an unconstitutional and immorral document with no legal authority whatsoever. i have been detained no less that 25 times by the City of Branson since 2008 by command of the King. She doesn't like the fact I've challenged her on moral ethical and legal issues. I've had enough. I am taking my 1st and 4th Ammendment rights back due to the extreme lack of integrity of King Presley and the Branson Chief of Police.
They are perpetually trying to block Sunshine Law Requests through tecnicality. If I was a more suspeicious person I'd say the paper shredder is on high. Sad, huh ? They've been doing this for some time. Putting me under arrest falsely and searching me without probable cause has been the tool of choice. Funny thing though - I can't seem to remember the name of any of the officers that have participated. I'm dumb like that. I have the same problem remembering people who smoke pot. are gay or of a minorty not in light of preferential treatment under King Presley law. I can no longer abide.
The real trajedy here is that my ability to help people is impeded but not in the way you might think. The greatest achievement in my life was saving an 11 year old girl from possible rape and or death. She was incredibly beautiful and overdeveloped for her age. Her single mom didn't have an eye on her and she found hersefl in a drug den in Crackaway Beach. The Taney County Sherriff Department couldn't find her for three days. Because I'm not a narc and carry a press pass I was able to enter a meth-lab and reason with a drug dealer. I asked, "Bring the girl back or the cops will be here shortly. I was able to find her unharmed before her life and if she lived her inner being forever altered in a darkness you and I cannot imagine.
When a police officer follows me around city hall I'm put in danger. It intimidates regular citizens and makes criminals think I'm a cop. All over town drug dealers have made this assumption. Outside of these grangiose statements about the Bill of Right and Civil Liberties , I'm constantly in a position of threat. Members of the police force don't like me (not sure who ) and drug dealers think I'm on your payroll. If I comply with the Kings Edict anymore people could literally die.
We live in a great country and people don't realize how and why. Our true blessing - what makes us the greatest country in the world is our creativity. King Presley, the town (CENSORED BY DICTATE OF PRESLEY), stiffles my creativity everyday. I am bound by the complicity of the press, and a money laundering operation that is literally killing our economy. Meanwhile the media , some local churches, charity organizations, tax district managers and public relation officers have determined it's ok to turn the other eye - I cannot turn the other cheek.

The incident that occured with Tex the other day is not wholly your fault. It is indicitive of a culture of curruption reaching democrats reaching to the statehouse.
i will no longer tolerate this strange withcraft that denies my rights granted by the almighty.
You knew that delivering that "spell" was without King Presley's authority. She is not a king. She is a nitwit with such little honor that she deserves pity, and exposure for the money laundering operation that has drained our city treasury. Her agenda of earth worship (extreme environmentalism) and supporting gay rights (very popular at this moment in history) doesn't exactly fit community values . If I expose this - she can't win an election and she knows this. My 1st Ammendment rights are a direct threat to her authority.
The higher ups at your department didn't like us talking. When we talk and understand each other we can help each other. If we help and understand each other as human beings we respect each other. If we respect each other tyrants and dictators have no power - the voice of the people remains supreme.
In a very constructive way you chose not to violate my civil rights while a police officer "fatty mc douche" (I think that's his name - sorry, my disability makes it hard for me to remember names) threatened me, restricted my movement and evicted me from public property. I fled. I fled because i know by law you don't have to arrest anyone for committing a crime - even murder; but you'll have to arrest me if an effective restraining order is violated. I will never resist arrest nor will i be in fear of helping my fellow man.
I told officer "fatty mc douche" that if he wants to enforce an edict, he will have to do so through proper legal channels and color of law. He asked me to talk to my attorney. I told him I don't have "a" attorney, but I have many friends and family in the legal field.. Again, as I told him. I will no longer allow my 1st and 4th Ammendment rights to be violated. I told this to Mr. Cruther head of King Presley's munitions management officer. You undersood and refused to put me under false arrest as "Officer Douche" did.
Under normal circumstances - a city like Branson would have a Public Relations Officer. Instead, a man was hired because of his servitude not experience. That has been costly in this case because Chief Crutcher issued a false statement in a press release . It was a cover up that was unneccesary. He told national media that no one in Branson complained when they saw the detainment of Tex. This is not true. To maintain the integrity and public perception of the police force I made a request for 10 years of complaints about the department to the city. Citizens will come to you first if they know you will respect their ability to make grievances. Many of us don't have guns - we rely on the integrity of our great community. i have to help restore that because the Branson Police Deparment is the most compassionate effective police force in the United States - douchebags have to go - sorry - my loyalty is to the citizens not a badge.

Thank you for protecting my civil rights. I know you've made some mistakes but it's ok. I promise you that I will do everything in my power to protect you. I've already started. If you notice the paper today you'll see the word "Excessive Force Questioned". I changed this from the word brutality because of the implications in the community.
If you ever have someone in crisis in the jail feel free to issue me a jaywalking ticket and arrest me. I consider you my friend and i love you for what you did for me. It's people like you that will help us keep this country great.
In Brotherly Love,
Your Friend - Darin Codon (Happy 4th of JULY)