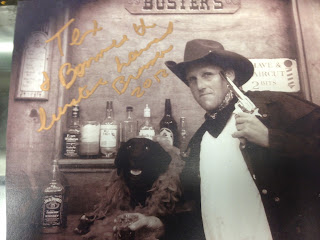 The photo above is of Tex, a homeless man citizens have reported was a victim of police brutality.

After a bullet was found in front of Tex's hotel room I personally ensured his safe passage to a condo in Branson. Since there wasn't anyone in Branson man enough (or foolish enough)  to tend the mentally disabled drifter I offered assistance. The police were called to the hotel in order to take the undischarged bullet into evidence - it's not clear if the bullet is police issue.

After reviewing a videotape of the police abuse incident (and currently I'm the only member of the press that has) , a post was made to de-escalate the incident to the term "excessive use of force".  This type of story is rare for the Branson Media as many outlets  refuse to explore citizen complaints surrounding police corruption.

Multiple cases have been reported to Branson and hid from the press (who rarely follow standard journalistic procedures anyway) .

Carroll McCollough, Branson's former police chief was removed from office due to overzealous officers. after the City of Branson paid out $30,000 to a victim of police brutality.  Mr. Crutcher, the current police chief was hired in his place.

Branson didn't go through the proper channels to make the hire but instead used the incestuous process of hiring the Branson Public Relation Officer's best friend. Both the Police Chief and current Public Relations director are from Normal, IL.

Many people have complained about the overuse of force to the police department; however, KY3 assisted Branson in an official press release which stated, "NO COMPLAINTS HAVE BEEN FILED WITH THE POLICE DEPARTMENT (an obvious lie). It is believed that the press release was issued to terrorize members of the public that have chosen to stand up against the "culture of corruption" fostered by our current moral free mayor - and KY3 business partner.

While I've been reporting the facts on the case, KY3 and KSPR have worked vigorously to dominate the storyline - they remain unsuccessful.

Since KY3 and KSPR generally don't cover Branson but rather re-print press releases from their business partner Raeanne Presley, it's very hard for this powerhouse media outlet to get a footing on the story. With every release KY3 helps partner Presley commit fraud publishing the statement, "Presley is dedicated to open honest government" (anyone have a barf bag ).

Tex has asked that donations for a fund be made to Hawthorne Bank for a program to comfort the families of Americans who have lost loved ones in combat. For one reporter (this guy) Presley issued a dictate suspending constitutional privilege. This has helped Presley successfully scare reporters who choose to do the right thing and assist the public in acquiring truth about Branson's top official.

Tex believes that the family of every soldier in America that has a son or daughter who died for their country deserves to have a bench with carvings of their family member engraved to memorialize their sacrifice. He has asked that the benches be placed publicly in the city where the family of the fallen soldier died. Perhaps, Shurz hates America (not yet verified). Tex's program is called, "Stoops for Troops". It is not clear whether KY3 has been successful in stopping Tex from honoring America's fallen.

In an attempt to lump Branson Area Media into the same category as Shurz (the parent company of KY3 and KSPR), and to endanger the lives of competitive reporters, KY3 turned police informant.

Branson's Police Chief generated a press release where it is implied Branson Media Companies deserve stitches. (It is well known in the outlaw community that "snitches get stitches"). The press release is published below:


By Command of Presley: Printed in Every Newspaper Pressed to Every Household  by Kent Crutcher: 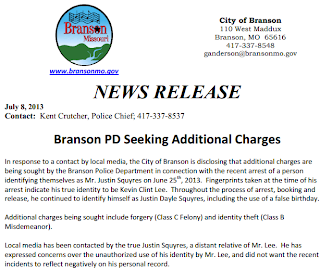 Branson's campaign to slander the Mentally Disabled man is unprecedented. Many citizens throughout Branson do not share Presley's disregard for the helpless (Presley has spent hundreds of thousands imprisoning citizens and 0 to help the homeless).

Presley is a co-owner of a theater in Branson that caters to a gay audience. The theater features singers wearing Liberachesque outfits playing show tunes on pianos.

While the Presley theater is an insignificant contributor to Branson's economy, money laundering operations have helped boost the family enterprise.

Covertly, Presley worked  to stop the Branson Landing project but was unsuccessful. Realizing Presley was a crook, misinformation was consistently passed to her - thwarting Presley's efforts to bring the multi-million dollar project onto her own land. Branson's former mayor, unwilling to take bribes, was unable to pay taxes on his house. At the last minute Branson's former mayor was taken off the ballot for having unpaid tax debt leaving Presley the only citizen on the ballot.

Presley's Anti-Economic Health and Money Laundering Initiatives
The Branson Landing was generating $100,000,000 in sales a year (few Branson residents understand this) but took a 20% fall when Presley came into office. Presley has actively bashed and projected a misinformation campaign to keep the public from understanding that the Branson Landing is now Branson's most visited attraction. Another plan is in effect to spend $100,000,000 to create a better road to her theater. Presley is the first mayor to run a deficit budget and has succesfully drained $13 million set aside by former administrations.

Presley has voiced,  the success of the Branson Landing hurts her business and has tried to censor entertainment. Presley's is Branson's 5th Entertainment Venue.

Higher incomes resulting from the Branson Landing have forced the Presley theaters to pay wages above the poverty line - a real economic problem for the Mayor.

After a film was being produced originally titled, "Raeanne Presley is a Big Fat Liar" ; Presley assisted a media company in gaining state funds to produce a movie as long as they promised not to humiliate her and glorify Presley's friends in the Democratic Party.

The film was recently released across the country , except in Branson where people know better, and  renamed, "We always lie to strangers". It's good to know Presley is  admitting she's a liar - but  this isn't indicative of the Branson Community (some of us have Christian ethics rejecting this strange witchcraft).

Presley was successful in obtaining funds for the film company and perhaps a few million for herself. Branson tax dollars were used to fund trips to Jefferson City for the private business venture. It is unverified as to whether Presley directly used the same program to create content for a station Shurz negotiated with Presley.

Schurz , the parent company of KY3 and KSPR entered a partnership with Presley signing help from a sitting Missouri Senator who is listed on FCC (Federal Communications Commission) document for a license to launch Branson Visitor TV. The relationship has been used to stop diversity in the Branson press. Shurz is a big help in the process. Branson is in the middle of litigation costing the city millions of dollars and quite possibly a $1 billion loss The 38th Circuit Court Media liaison , Schurz employee Gene Hartley, has perpetually denied photographer access to the proceedings of the case entitled "Coverdell VS. Empire District Electric". Court documents show the true landowner tried to settle for $25k. When the press isn't watching or compliant with fraud - politicians can spend whatever they want.
Citizens have secured a home for Tex and began eradicating pests over the weekend. Tex having a legitimate home is apparently a threat to Presley - a known oppressor of the poor and helpless. A few years ago Presley had to change churches when it found her "Christian" sanctuary was a hotbed for money laundering.

While some press outlets like KY3 (a special lubricant to screw the public) are assisting with efforts to slander the homeless man, others may help. Photos of the house being donated to Tex  are available free of charge with attribution  to any press outlets unaffiliated with Corporate Police Informant KY3.

While it's shameful that the Branson Police Chief was so inept he couldn't figure out that he booked and released Tex under a fake name - media outlets have not yet published the fact that Miranda rights were not read to Tex.

To date, Tex has been far more honest. During my second interview with Tex he admitted to using a fake name. I immediately brought Tex to his attorney where he shared the information. Due to Tex's obvious mental disability it is unclear what his attorneys did with the information.

Perhaps, Presley should have had the movie renamed, "Lying to Everyone is My True Religion").

While Presley is willing to spend thousands to jail a man for the horrible crime of trespassing (he was invited to the property after a previous ticket for trespassing) she doesn't mind forcing Branson's Chief Police officer to commit a verifiable lie to the public on command.

In response to corruption at City Hall and with the Press - Sunshine Requests have been filed to verify Crutcher willingly lied and for a complete list of expenses Presley forced the city to reimburse her for.

Gene Hartley is both the informant and man who has been actively blocked requests for access to the court. Please be careful what you say to KY3 they obviously are short on scruples.
Prepared by: Unknown